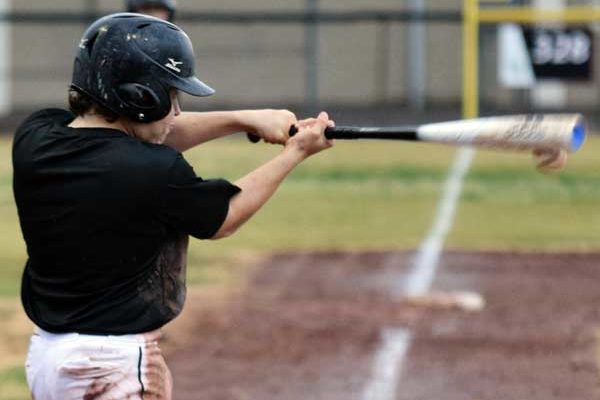 Photo By Raymundo Frasquillo: Michael Ortiz makes contact during a scrimmage with Safford on Feb. 16. Eight days later, the senior infielder batted .600 (3-5) with a home run and four RBIs during the season opener in Tombstone. Morenci batted .412 (14-34) as a team compared to .192 (5-26) by Tombstone.

TOMBSTONE – A 9-run fourth-inning eruption erased a 1-1 three innings deadlock in the ‘Town too tough to die,’ en route to a 13-4 season-opening Morenci win over Tombstone on Feb. 25.

Thirteen Wildcats went to the plate as 9 runs were driven in before three outs were recorded for a 10-1 advantage. Junior Trey Trujillo singled in a walked junior Antonio Gallegos, sophomore Zach Waltrip singled in both singled junior Christopher Roybal and Trujillo, junior Omar Ortega drove in both Waltrip and himself with a home run, and senior Michael Ortiz singled in both singled senior Justice Boling and beaned senior Brayden McCarthy, Gallegos singled in a singled Derek Waltrip, and a Trujillo centerfield sacrifice fly allowed Ortiz to score with two outs.

The Wildcats added three runs in the sixth, Ortiz homered in a tripled Derek Waltrip and a doubled Gallegos crossed the plate on an error with no outs to lead 13-2. Ortiz singled in a beaned Derek Waltrip in the third inning to tie the score at 1-1.

Bracket play begins Saturday, March 3, with the top two teams plus the top two number three teams in the three pools competing in the Gold Bracket, numbers 9-14 in the Silver Bracket, and numbers 15-18 in the Consolation Bracket.