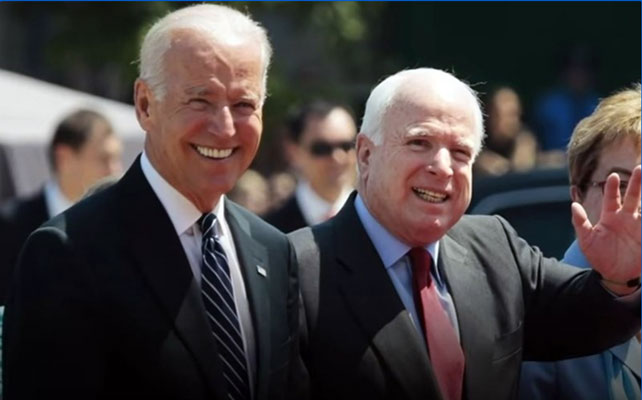 Photo Courtesy the Biden Campaign: The memory of the late Sen. John McCain, right, an Arizona Republican, was invoked this week by the campaign of Democratic presidential nominee Joe Biden, left. Several prominent Republicans spoke out in support of Biden at the Democratic National Convention.

WASHINGTON D.C. – Longtime Arizona Republican Daniel Barker wants you to know that there is much in the Democratic platform that he disagrees with – but that won’t keep him from voting for Democratic presidential nominee Joe Biden this fall.

“One of the things that troubles us the most about our current president is just that these principles of respect for one another aren’t really demonstrated,” said Barker, founder of Arizona Republicans Who Believe in Treating Each other With Respect.

Barker did not speak at this week’s Democratic National Convention, but plenty of other Republicans did, outlining for a national audience either their dislike of President Donald Trump or their admiration for Biden.

They included Sedona resident Jeff Jeans, a onetime conservative who became an outspoken supporter of Obamacare after it saved his life, and Cindy McCain, who narrated part of a video of the “unlikely friendship” between Biden and her late husband, Arizona Republican Sen. John McCain.

Arizona Republican Party officials did not respond to requests for comment. But Rep. Debbie Lesko, R-Peoria, said during a pro-Trump conference call this week discounted the Republicans who went on record opposing Trump.

“The swamp sometimes fights back,” she said on a “Trump Victory” call Wednesday. “They don’t like this stuff.”

But there appeared to be no shortage of Republicans at the Democratic convention who “don’t like this stuff.”

Republicans given prime speaking slots included former New Jersey Gov. Christine Todd Whitman, former Secretary of State Colin Powell, and former Ohio Gov. John Kasich, who defended the GOP and said he would not normally address a Democratic convention, “but these are not normal times.”

“Many of us can’t imagine four more years going down this path, and that’s why I’m asking you to join with me in choosing a better way forward,” Kasich said in his Monday address.

While the speeches made headlines, Jacob Rubashkin said “it’s hard to tell” how effective the strategy will be in battleground states like Arizona in November.

“I think the organizers of the convention clearly think that their stories are persuasive,” Rubashkin, a reporter at Inside Elections, said of the GOP speakers. “They think they have an opportunity to kind of reach voters who are less engaged with the political process.”

“I think it started out with things like running a trillion-dollar deficit when we had a strong economy and, you know, using every tool in the toolbox to juice the economy,” said Brierley, who thinks the administration has abandoned conservative economic values.

Brierley said he chose July 4 to make a statement about the intense pressure Republicans face to keep silent about what they see as Trump’s shortcomings.

“You know, there’s so much pressure within the Republican Party that if you’re Republican,” he said. “You have to, you have to support Trump and I just wanted to let it be known that I don’t.”

That attitude was echoed by C.J. Diegel, the Arizona state director for Stand Up Republic, who wants “to be able to talk about it without having someone jump down your throat or call you names, just because you share a slightly different viewpoint.”

Opposing Trump is not new for Brierley, who refused to support him in 2016 “because I didn’t think he really rose to the level of humanity that we needed in the presidency,” he said. But it’s more than just respect: Brierley believes the Trump administration is “a threat to our Constitution and our republic.”

“Republicans right now seem to be about dividing and instilling fear,” Brierley said.

But while some criticized Trump, others backed Biden. Rubashkin said many “old guard” Republicans in the Senate, like McCain, “who were sour on Trump before and have only grown more sour on Trump since then … a lot of them also have fairly good relationships with Joe Biden, from his time as chairman of the Senate Foreign Relations Committee.”

Barker and his PAC hope to plant in 45,618 “Republicans for Biden” signs in Arizona, to represent half of Trump’s margin of victory in the state in 2016. Since then, Arizona has become a battleground state, with Biden leading Trump 47% to 45%, according to a Real Clear Politics summary of polls last week.

Brierley, Deigel, and Barker, like Kasich, insist that they are not about to switch to the Democratic Party, but they say they cannot support Trump.

“We do not endorse many aspects of the Democratic platform,” Barker said. “But we do endorse Biden over Trump. We think that he will demonstrate some of the characteristics, particularly respect for others working together, that are very important.”

Diegel said Biden presents an opportunity to “rebuild,” before adding that, “I would cast a vote for the ghost of John McCain if the candidate wasn’t Joe Biden.”