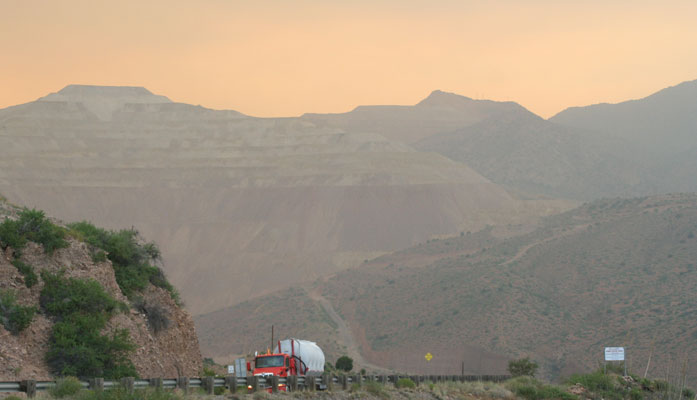 Walt Mares Photo/Gila Herald: Smoke from the Bringham Fire north of Morenci drifts over the Freeport McMoran Morenci copper mine partially obscuring it on June 17. The fire, 22 miles from Morenci, is in the Apache-Sitgreaves Forest. During the daytime the sky is clear and smoke settles over Morenci and nearby Clifton during the evening hours. That is from the wind changing direction.

“Who has seen the wind? Neither you nor I.”

GRAHAM AND GREENLEE COUNTIES – Yes, the wind is not visible but what it carries can indeed be seen. Take for instance the smoke blowing into the Clifton-Morenci area. The wind shifts in the evenings and carries smoke from the Bringham Fire.

It is burning in the Apache-Sitgreaves National Forest, 22 miles north of Morenci. Until recently, one never heard much comment about it. On Wednesday evening, June 17, around 5 p.m., the smell of smoke became stronger bringing comments from several people, some of whom said it was affecting their breathing.

The skies over Clifton-Morenci have been a clear, bright blue during the daytime. It is in the evening that smoke becomes visible, creating a haze over the Petahaya Mountains which ring the two communities. The smoke is most visible from Morenci which sits on hillsides about 500 feet above Clifton, located in the San Francisco River and Chase Creek canyons.

Benches in the Morenci mine which are quite visible when traveling from Clifton to Morenci via U.S. Highway191, are far less visible than normal because of the haze.

The mine benches are covered with a thick haze. From Morenci, looking down toward Clifton one sees a thick haze over Clifton Peak and other sharply peaked mountain tops nearby.

Some folks who wear face masks to ward off the coronavirus when they are in public places are now, because of the smoke, wearing them until they enter their cars and into the comfort of air conditioning. But as has been the case since March when some people and business staff members began taking caution by wearing masks, most people continue not to wear them.

It was a different fire, however, that wrought the communities of the Gila Valley throughout the afternoon and early evening Wednesday. Smoke from the Bighorn Fire on Mount Lemmon in Tucson wafted into the Gila Valley, bringing its distinctive burning wood smell, causing eyes to water, making breathing outdoors difficult for some and blotting out the sun.

As of Thursday, the Bringham Fire was listed at 17,423 acres with 5 percent containment. Strong winds spread the fire further north off Red Mountain and down into the southwestern side of Strayhorse Canyon.

Crews are working to protect structures in the area of the fire by covering nearby cabins with an aluminum wrap to shield them from radiant heat and flying embers.

On the bright side, if there really is one, is that the smoke from the current fires is nowhere near as thick as it was during the Bear Wallow Fire of 2011. The smoke was so thick it was not possible to see across the narrow San Francisco River Canyon, a distance of about a half-mile.

That fire began on May 29 and was finally brought totally under control on July 8.

Because of the length of time the Bear Wallow burned, people became very edgy about when the smoke would stop blowing into Clifton-Morenci.  Morenci than one person commented to a news reporter that they wondered if this was what the end of the world would be like.

The cause of the fire and its devastation? Two supposedly experienced campers failed to adequately extinguish their campfire. They said they dropped a candy wrapper on the coals and it did not burn so they assumed it was extinguished.

That should serve as a reminder to all to properly extinguish fires whether it is a campsite or on charcoal-fueled grills at home. With the months-long lack of rain, except for some rainfall last week, any type of fire should be closely monitored. As for burning weeds or trash, forget it.