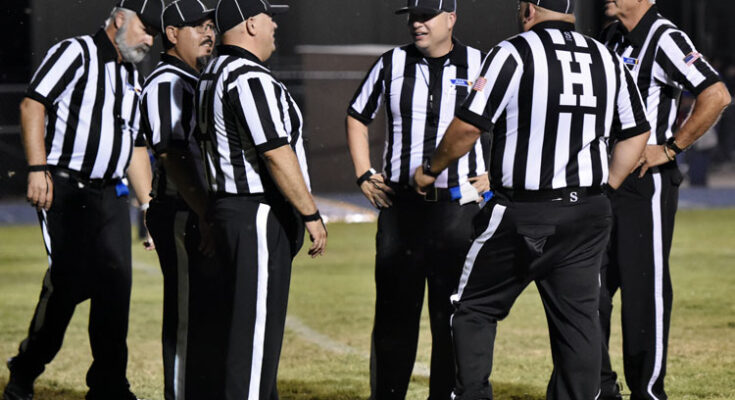 Raymundo Frasquillo File Photo/Gila Herald: Working as a high school official can be a lonely business. The verbal abuse by fans is one reason there is a shortage in Arizona and why the AIA has asked football teams to play at least one Thursday night game.

PHOENIX – Anne Montgomery started her officiating journey over 40 years ago. She officiated football, hockey, and baseball among other sports before retiring in 2019.

Sustaining a four-decade-spanning career is rare. To do it as a woman is even rarer. The Arizona Interscholastic Association said most officials quit around the three-year mark, and the most common answer to why is verbal abuse from fans and parents. One of the problems isn’t that it’s happening – it’s getting worse.

The AIA has had to ask high schools to schedule one varsity football game on a Thursday to help alleviate the number of games that are played on Fridays. This is because of the shortage of officials as more quit or retire to avoid verbal abuse from fans, coaches, or players.

“The number one concern is abuse, fan abuse in particular,” AIA director of athletics and officials Tyler Cerimeli said. “It’s very difficult to get people to come out and work when half the people there aren’t going to like you very much.”

Montgomery officiated years before the vast, instantaneous world of the internet. Toward the end of her career, she noticed how harassment and bullying spread to the internet for perceived missed or inaccurate calls.

“Officials are expected to be perfect all the time and we’re not,” Montgomery said. “It used to be that you’d make a bad call and everyone screams. I’ve been spit on; I’ve had to have police escorts to my car. But today, it’s so much worse because people put it on the internet. It’s not just that one moment in time, it’s endless.”

The harassment caused many officials to leave their job. It’s a thankless job, to begin with, and it only gets worse as more people use social media like Twitter to attack officials. Cerimeli says he hears this sentiment during exit interviews with his officials.

The number of officials across the country is down and continues to slip further down. Arizona, which had an uptick in the number of referees in 2021, still remains below AIA’s desired goal. As a result, the AIA has asked 5A and 6A schools to schedule one varsity game on Thursday for the 2022 season.

Mesa Mountain View played its varsity game against Desert Mountain on a Thursday. It was one of 12 games that took place on Sept. 15. Some schools, like Desert Mountain, don’t have a junior varsity team, so moving a varsity game to Thursday has lessened the load for football officials on Fridays.

“Our coaches have done a good job of communicating why (the game is on Thursday), which we all know the why is because we have a shortage of officials,” Mountain View athletic director Joseph Goodman said. “Hopefully, it is a message to everybody that we do our part as a school, as fans, as a team that our officials feel valued and respected.”

Parents, students, cheerleaders, coaches, and the band acknowledge the difference between Thursday games that sometimes feel like Friday games.

“I’m going to put in a late night and have to come to school tomorrow,” Goodman said before the Thursday kickoff. “I talked to the security team, and we’re going to make an effort to turn the lights off a little earlier tonight (to) get the fans home earlier because it’s a school night.”

Montgomery believes a key to boosting the number of officials is in recruiting more women to join the ranks.

“Nobody’s recruiting female officials unless it’s sports that women play,” Montgomery said. “One of my officials told me 20 years ago, ‘It’s really too bad you don’t do women’s sports, you really might get somewhere.’ And I said, ‘Well, I like football and baseball.’ They don’t actively recruit women in anything they don’t normally play.”

For many years, Montgomery was the lone female official in the annual football meetings. She would sometimes see one or two other women, but they would quickly disappear.

The AIA does recruit officials but has tried to focus more on retention than recruitment in recent years. For recruitment, the association asks each school to provide one male and one female graduating senior that the school thinks could be a fit. The AIA is also working with schools in the Dysart Unified School District to offer an officiating elective class that high school students can take to get them prepared for a career in officiating.

A challenge in recruiting and retaining women is the treatment of women. Throughout her career, Montgomery had been told by referees that crews with women don’t get the opportunities that other crews get.

“Twenty-five years ago, I kept getting thrown off officiating crews,” said Montgomery, who became a referee so she could pick her own officiating crew. “The men were really honest with me. They said, ‘We aren’t going to get any big games with you on our crew because you’re a woman.’ And I hated them for it, but they were right. … I would like to tell you that 40 years later it was easier for me to be an official, but it wasn’t.”

This issue extends beyond AIA and the high school level. Todd Sergi is the Arizona State Referee Administrator for U.S. Soccer. He is connected to all things involving soccer officiating for U.S. Soccer and works closely with the Arizona Soccer Association.

Parts of his job include training, instruction, development, and reports on officials in the state. Posted at the top of the website, azref.com, is a prompt to submit a report on referee abuse.

“We had a young lady on a match in a tournament that the parents were berating during the match. The director of coaching came on the field of play and verbally abused her (and) brought her to tears,” Sergi said. “When we got the video and the report, it stirred something in us. We said we need to take more of an active role in getting information from our referees in all events.”

Referees, parents, coaches, and players can file reports on verbal abuse so the association can track the instances and make better decisions on how to address each case. In its first year in use in 2021, the association received 62 cases of referee abuse.

“It’s been a great tool for us to get information and take action on behalf of the referees in the state,” Sergi said. “Particularly with Arizona soccer, because we have such close ties with them. It is easy to take action quickly.”

The referee issue is two-fold: There aren’t enough people and the majority of them are over 60.

“Most officials when they come out for the first time, they were around sports, their kids were in high school, their kids went to college (now) they’re looking for something to do,” Cerimeli said. “They tend to skew older or middle-aged.”

“You have to have officials or else you don’t have a game,” Goodman said. “It’s an investment in ourselves. We have to be good so that we can have these events and outings. You’re investing in what you want.”

There is no simple solution, but Sergi, Goodman, Montgomery, and Cerimeli agree that refs need to be treated better if youth sports are to continue.

“Right now, the environment is continuing to get worse,” Cerimeli said. “That is something else we have focused on in the past couple of years, trying to turn around sportsmanship, trying to fix those issues and make officiating more appealing.”