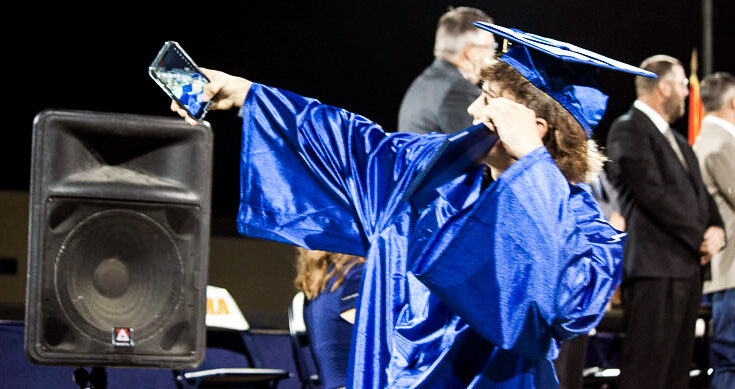 PIMA – After having to hold last year’s commencement ceremony virtually, throngs of people crowded into Edd Hubbard Field in Pima on Wednesday night to enjoy a back-to-normal graduation ceremony.

The crowd celebrated the achievements of 74 graduates who had a night of recognition that – for a time – was in doubt of being held.

“This group has had so many challenges over the last two years,” said Pima Superintendent Sean Rickert. “And we saw from the speakers that they’re focused on what they’ve accomplished, not on the adversity but on how it’s strengthened them and helping them to do better as they go forward. That’s what we want graduation to be about – that step forward.”

The evening also recognized those who weren’t present, including Mason Gann, 16, who was given honorary graduate status. Gann tragically died in an automobile crash on Feb. 21, 2020, along with Kade Nelson, 16, of Thatcher, and Emmett Darnell, 17, of Duncan. The boys were traveling in an Eastern Arizona College van coming home from a school trip when it rolled on U.S. Highway 70 just west of Pima.

“We had the pandemic and online learning and that was a very interesting time,” said valedictorian Olivia Norton. “Each and every single one of us has had very personal and unique trials. Some have been physical. Some have been mental and emotional. Our class has even had to deal with the loss of some of our classmates. But the thing that my classmates have taught me is that it doesn’t matter what your hardships are. It doesn’t matter what bad things happen to you. We get to choose our attitude, and we get to choose if we’re happy. And I think that’s a pretty amazing thing.”

After an invocation in Spanish and one in English that was not on the program as prayer cannot be a school-sponsored activity, Tim Salyer and Elizabeth Warn took turns recalling the class’ histrionics over the years.

Warn had the crowd in stitches when she recalled a time when she was a freshman and a teacher forgot about a scene in a movie involving William Shakespeare’s Romeo and Juliet that showed a person’s posterior.

“So, this class of freshman is freaking out and she (the teacher) is trying to skip it and she ends up pausing it instead which just made them roar even louder . . . It was really a sight to see.”

After the class history, Paityn Mattice treated the crowd to a special musical number that warmed the heart.

While many graduates will head off to colleges and universities, most already secured college credits through the school’s partnership with the Gila Institute For Technology and Eastern Arizona College – some have amassed enough college credits to already have earned an Associates Degree along with their high school diplomas.

At the conclusion of the night’s festivities, the graduates congregated together on the east side of the football field as usual and tossed their graduation caps high into the air. They were then joined by the crowd, which came together on the field to celebrate the achievement.