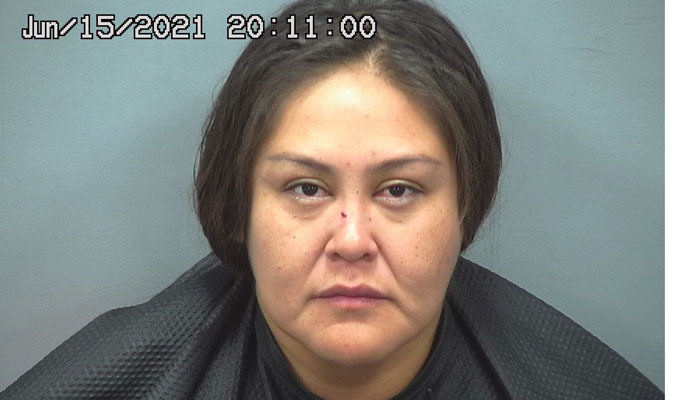 Contributed Photo/Courtesy GCSO: Renita Moses was booked into jail on two warrants with additional possible charges of DUI and driving on a suspended license pending. Moses was arrested on suspicion of DUI after colliding with another vehicle on U.S. Highway 70 on the San Carlos Apache Reservation.

SAFFORD – A woman who allegedly admitted to dealing methamphetamine on the San Carlos Apache Reservation was jailed on June 15 after being involved in a  collision in which she is suspected of driving under the influence.

Renita Renelle Moses, 32, of Bylas, was arrested and booked into the Graham County Adult Detention Facility on two warrants out of Graham County; one for false reporting to law enforcement and one out of Pima Justice Court for failure to appear on a shoplifting charge. According to online court records, Moses also has another warrant out of Gila County for failure to appear regarding a charge of possession of an open container of liquor as a passenger in an automobile. Additional possible charges of DUI and driving on a suspended license are pending blood test results and review by prosecutors.

According to a Safford Police report, an officer was dispatched to the Mt. Graham Regional Medical Center (MGRMC) at about 3:26 p.m. to assist a San Carlos Apache Police officer who was investigating Moses for a possible DUI. Moses had been in an automobile collision on U.S. Highway 70 on the San Carlos Apache Reservation and was suspected of DUI. According to the report, Moses’ driver’s license is currently suspended due to a prior DUI.

The Safford officer advised Moses of the situation and she allegedly stated that if another party was injured in the collision there was “no way in hell” that she would consent to a blood draw. The officer advised Moses that he was going to apply for a warrant, advised her of her Miranda rights, and said she was not free to leave. He then went to the Safford Police Department and applied for an electric warrant, which was approved.

Upon the Safford officer’s return to MGRMC however, he learned Moses had been belligerent to staff and was kicked out of the hospital. Security personnel advised they last saw Moses heading toward the Mount Graham Safe House.

Safford officers then responded to the Safe House and detained Moses on her two warrants out of Graham County. A blood draw was also performed after Moses was given a copy of the warrant.

While being transporting and booking Moses into jail, the officer performed an inventory of Moses’ purse, which contained some marijuana and several black baggies. Moses allegedly advised that she uses the black baggies to sell methamphetamine and other hard drugs and has done so to support herself since her husband left her several months ago. The baggies and marijuana were placed into evidence and for destruction and Moses was booked into jail without further incident.