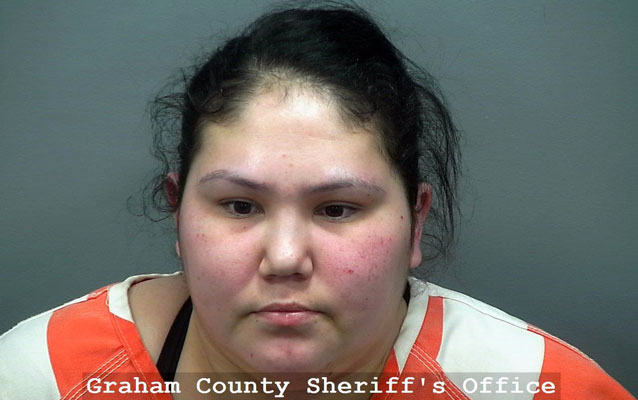 Woman was allegedly DUI-drug and looking to score fentanyl

SAFFORD – A woman who seemingly put her desire for opiates over the health and safety of her children was apprehended after fleeing from police while allegedly under the influence.

Janelle Rose Arevalo, 27, of Phoenix, was arrested on Dec. 27, 2021, and booked into the Graham County Adult Detention Facility after fleeing from police first in her car and then abandoning her children and fleeing on foot. Arevalo was apprehended soon after, and her children were turned over to Arevalo’s mother after they were evaluated by paramedics. The Department of Children Safety has opened a case regarding the children.

Arevalo is wanted out of Maricopa County for failure to appear regarding aggravated DUI charges from 2020.

According to a Safford Police report, an officer was westbound on U.S. Highway 70 at about 10:20 p.m. when he noticed a vehicle traveling eastbound without any headlights illuminated. When the officer attempted to make a traffic stop, the vehicle rapidly accelerated through a hotel parking lot and then headed eastbound on U.S. Highway 70, going 85 mph in a 35 mph zone.

According to radio traffic from the various officers in pursuit, the car went airborne when it blew a stop sign at 1st Avenue and Lonestar Road. The officer also reported that the car was swerving within its own lane and driving erratically as if the driver was under the influence of drugs or alcohol.

The police continued to follow Arevalo as she made her way back into Safford with her car losing fluid from undercarriage damage. Stop sticks were deployed at the intersection of Relation Street and 8th Avenue, however, Arevalo turned north on 10th Avenue and then traveled down side streets. She then stopped in front of a house in the 1100 block of S. 9th Place that is known to police to have involvement with illicit substances.

At that time, Arevalo ran toward the front door but the officer caught her before she made it and knocked her to the ground.

The Safford officer was then assisted by a Thatcher officer, but Arevalo reportedly resisted being taken into custody while screaming for her mom.

The officer reported that it wasn’t until they were walking Arevalo back to his patrol vehicle when he noticed the children, ages 4 and 10, in the car, along with Arevalo’s adult brother. According to the report, the 4-year-old hit her face when Arevalo jumped the car and the 10-year-old complained of stomach pain. After being evaluated by EMS, they were released to their grandmother.

Arevalo allegedly said she ran from the police because she knew she had a warrant for failing to deal with aggravated DUI charges out of Maricopa County Superior Court. In that case, she also had children as passengers.

Arevalo also allegedly admitted to drinking alcohol earlier in the night and said she had taken a counterfeit blue oxycodone fentanyl pill that morning and was looking to purchase some more, according to the officer’s report. She said she had just picked up her brother from work and she was going to the motel to purchase a couple of pills for $10.

She was then transported to the jail without further incident and the vehicle was towed from the scene.