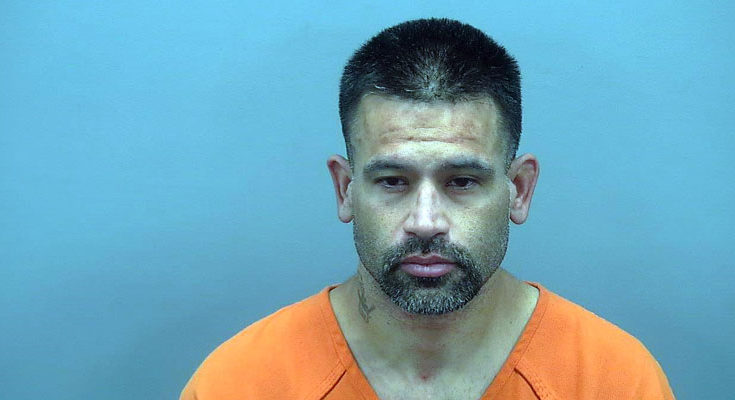 Contributed Photo/Courtesy GCSO: Daniel Delgado, 26, was caught with a small amount of methamphetamine when he was arrested on a felony warrant Saturday, Oct. 19.

SAFFORD – A man wanted on a felony warrant was apprehended after an officer spotted him walking down Main Street in the early morning hours of Saturday, Oct. 19.

Daniel Delgado, 37, was arrested and booked into the Graham County Adult Detention Facility on his warrant. Delgado was also given an additional charge of possession of a dangerous drug (methamphetamine) after a baggie containing .7 of a gram of the drug was discovered on his person.

According to a Safford Police report, an officer was on patrol at about 12:40 a.m. when he noticed Delgado walking westbound on the south sidewalk down Main Street. The officer ran a records check and learned of Delgado’s active felony warrant.

The officer then turned his patrol car around and caught up to Delgado, who at that time was running along the sidewalk outside of the Safford Fire Department on 7th Avenue. Delgado acknowledged the officer and started walking. When the officer called him out by name, Delgado stopped and lit a cigarette.

Delagado allegedly said he was running to get home to his girlfriend who was having a bad night. The officer noted that Delgado appeared to be under the influence of meth and Delgado allegedly admitted to using it earlier in the day.

Delgado was then taken to the jail and booked on his warrant with his possession of a dangerous drug charge forwarded to the Graham County Attorney’s Office for review. The meth was placed into evidence storage and the syringe was photographed and then destroyed.

This article has been corrected to reflect Delgado’s age as 37 and not 26 as previously reported.