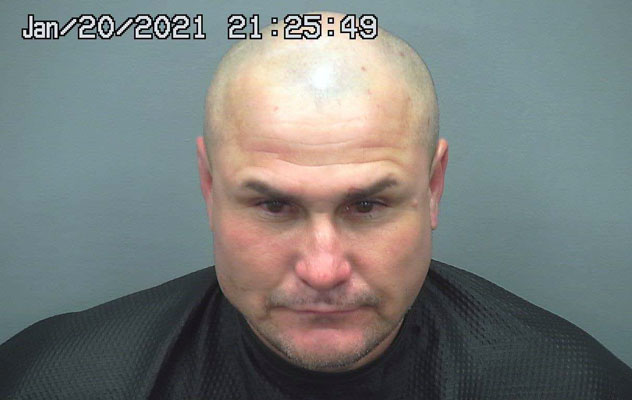 Contributed Photo/Courtesy GCSO: Sergio Lira’s luck of running from law enforcement came to an end Wednesday and he was booked into jail on multiple charges.

SAFFORD – A man who had run from officers on numerous recent occasions was apprehended after attempting to flee from a pursuing Arizona Department of Public Safety Trooper.

Sergio Lira, 44, was arrested Wednesday and booked into the Graham County Adult Detention Facility on charges of unlawful flight from pursuing law enforcement, possession of drug paraphernalia, endangerment, resisting arrest, separate incident counts of unlawful flight from pursuing law enforcement, endangerment, and aggravated assault with a deadly weapon, and a warrant stemming from a petition to revoke his probation regarding an attempted burglary conviction.

Officers had been looking for Lira since an incident that occurred on Jan. 8 at the Walmart parking lot at 755 S. 20th Ave.

According to a Safford Police report, an officer was dispatched at about 12:50 p.m. to the store regarding a man passed out in his vehicle. Upon arrival, an officer located Lira asleep in his parked car with an open 40-ounce beer can in his lap.

As the officer knocked on the window, Lira awoke and managed to pull his door back shut and lock it after the officer began to open it.

Lira then began to go in reverse toward the officer’s patrol vehicle, but then went forward, forcing the officer to jump out of the way to avoid being struck by the car, according to the report. That action led to the charge of aggravated assault with a deadly weapon.

Lira then sped through the parking lot at “an extremely high rate of speed” past several pedestrians and ran the stop sign at 20th Avenue and Relation Street.

The officer initiated a pursuit and advised Lira weaved heavily through traffic and before turning off 20th Avenue and onto a dirt farm road. He then sped through the Safford area down other streets until finally heading north on U.S. Highway 191. At that time, the officer terminated the pursuit.

An attempt to locate was issued for Lira, and he was spotted at a residence by deputies the following day but fled from them as well and got away again.

His luck ran out when he fled from the DPS Trooper, however, and he was booked into jail.