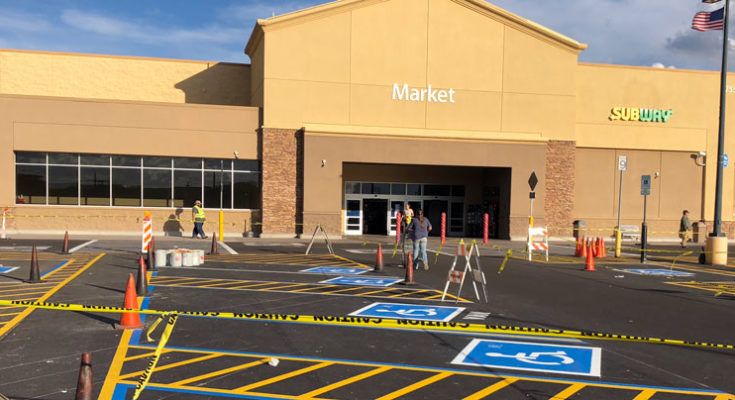 Jon Johnson Photo/Gila Herald: An employee with the group repaving the Walmart parking lot was taken by the Border Patrol to investigate his legal status to be in the country.

SAFFORD – An employee of the group repaving the Walmart parking lot was turned over to the Border Patrol on Friday after he could not produce any documents relating to the United States.

An officer was dispatched at about 10:36 a.m. to Walmart at 755 S. 20th Ave. regarding a private property accident.

According to a Safford Police report, a man on the paint crew of the group repaving the parking lot was riding in the back of a pickup truck setting out paint buckets in different locations when the driver accelerated too fast and caused him to fall.

The man injured his head when he fell out of the truck, and he was transported by paramedics with Lifeline Ambulance to the Mt. Graham Regional Medical Center for treatment.

When asked for his driver’s license, the driver only provided a Mexican identification card and didn’t have any documents relating to the United States.

The driver was then taken to the Safford Police Department, where he was later turned over to the Border Patrol. Agents with the Border Patrol then took the driver to their Willcox Station to further investigate his legal status for being in the United States.