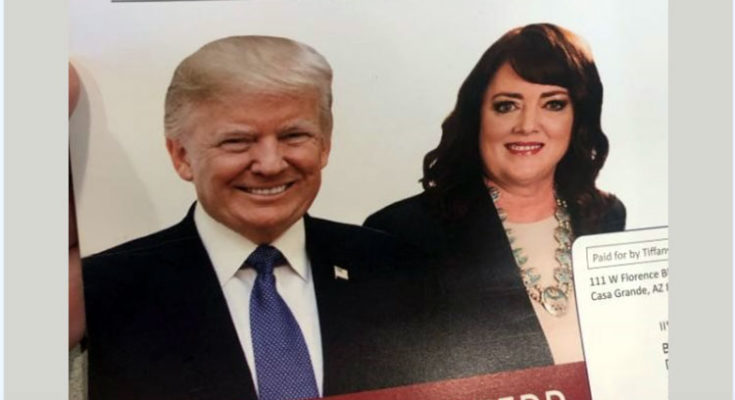 Contributed Photo: Some voters and another candidate for Arizona’s 1st Congressional District believe this flyer mailed by Tiffany Shedd’s campaign featuring her next to President Donald Trump is disingenuous as Trump has not officially endorsed any candidate in the race.

SAFFORD – As far as elections go, the Republican Primary race for Arizona’s 1st Congressional District has been pretty cordial, but that doesn’t mean some people believe some shenanigans aren’t still occurring.

Recently, some in the Gila Valley received a flyer from the Tiffany Shedd campaign in the mail that depicted Shedd prominently next to President Donald Trump.

While the flyer did not explicitly advise that Trump had endorsed her for, some voters believe that it was implied by the flyer and that it was a form of fraud. To date, Trump has not given any candidate in the primary race for CD1 an endorsement.

Shedd’s opponent in the primary race, attorney Nolan Reidhead, is himself a Trump supporter and said the flyer is deceiving.

“It is a disservice to the voters when a candidate puts out a flyer misrepresenting an endorsement when, in fact, there has been no endorsement given,” Reidhead wrote in an email to the Gila Herald. “It is even worse when a candidate puts out a picture of our president on the same flyer to intentionally mislead the voters into thinking that the president has endorsed her. The voters deserve a candidate that will be honest and forthcoming.  If a candidate will mislead and misrepresent the facts and information to the voters in CD1 in an election cycle, what will she do if elected?  We need better leadership that will be honest and forthright to our communities and people.”

While not directly addressing the criticism, Shedd responded by saying she supports Trump.

“Unlike some other Republicans, I’m proud to stand with President Trump,” Shedd wrote in an email to the Gila Herald. “Securing the border is a personal issue for me and my family, as it is for many in the district, that’s why voters can count on me to work with the president to secure the border and fight for our rural Arizona values in Congress.”

Mail-in voting has begun and the primary will be held Aug. 4.

This article was updated at 6:25 p.m. on Thursday to include comment from Tiffany Shedd.