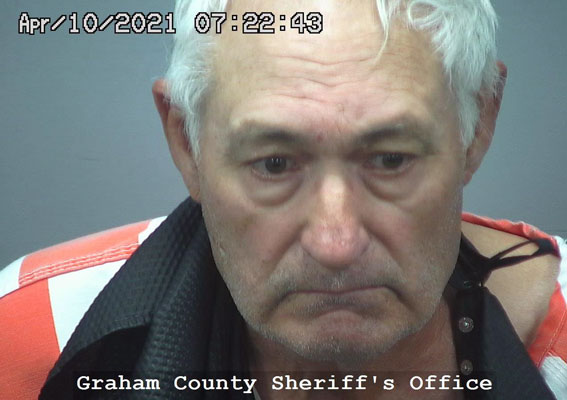 THATCHER – Video from an interaction between a rancher and four juveniles riding off-road vehicles show the rancher intentionally ram his truck into an ATV two of the juveniles were riding.

The incident took place in the 3900 block of Valley View Road on April 7 and was reported at about 7:13 p.m.

In the video, the juveniles are shown leaping from the ATV mere seconds before a truck allegedly driven by Harold Robert Lackner, 67, of Willcox, enters at a high rate of speed and slams into the off-road vehicle. After cursing and failing to learn the juvenile’s home address, Lackner then allegedly proceeded to retrieve a knife and slash all four tires on the ATV before leaving the area. Several videos were obtained by police, and some were also uploaded to social media by some of the victims’ relatives. A later inspection of the ATV showed the damage from the truck and the four slashed tires.

The video and Lackner’s actions were corroborated not only by the four juvenile victims but also by a delivery driver who was in the area. Lackner was arrested the following day following a traffic stop in Willcox and has been charged with four counts of aggravated assault, four counts of endangerment, criminal damage, and threatening or intimidating.

At that time, the youths advised Lackner stopped them while they were traveling on the main road, which is maintained by the city of Safford, and threatened to “put a bullet in their head.” The youths said while Lackner appeared to attempt to retrieve a shotgun from his truck, none of the victims ever saw a firearm and they fled. Officers were shown the area later and it came up as being city of Safford-owned land. The city also owns the Blue Ponds area.

After driving past Lackner in the desert, the youths met back at Valley View Road. That’s when Lackner allegedly rammed his truck into an ATV. The second off-road vehicle then left the scene at that time, and the two youths who were on the ATV just before the collision ran from the scene as well but one stopped and documented the interaction. After ramming the ATV and slashing its tires, the operator of the Chevy truck – identified as Lackner – crashed into the ATV once more before leaving the scene.

Authorities identified Lackner from the various videos and Police Chief Shaffen Woods advised the town’s police have had multiple dealings with him and had personally heard him curse and make threats in the same manner as displayed in the videos.

“He has been brought to magistrate court on city code violations and been disruptive and belligerent during these hearings,” Woods wrote in his report. “He is well known in the area and his behavior is often consistent with the type of behavior that is reported to have occurred in this incident.”

Authorities searched for Lackner that day in Graham County and Willcox where he resides but he was not located. The following day, authorities – including some from the Safford Police Department – spied Lackner driving his truck in the Willcox area and initiated a traffic stop after he committed a minor moving violation.

After his arrest, a search warrant for Lackner’s home and other property was signed and the truck believed to have been involved was located on some property behind a shed near his home. The truck had a large dent on the passenger side and damage to its grill. The truck was also a perfect match for the one portrayed in the videos of the incident. The truck was later towed from the scene and seized as evidence.

When questioned about the incident, Lackner claimed he didn’t know what the police were talking about and denied being the person in the videos and that the truck shown was not his. Lackner then requested an attorney and the interview was halted.

Lackner was extradited to Graham County and is being held in the Graham County Adult Detention Facility on a $200,000 bond. His case has moved out of Justice Court and is now being adjudicated in Graham County Superior Court with Channen Day serving as his defense attorney.