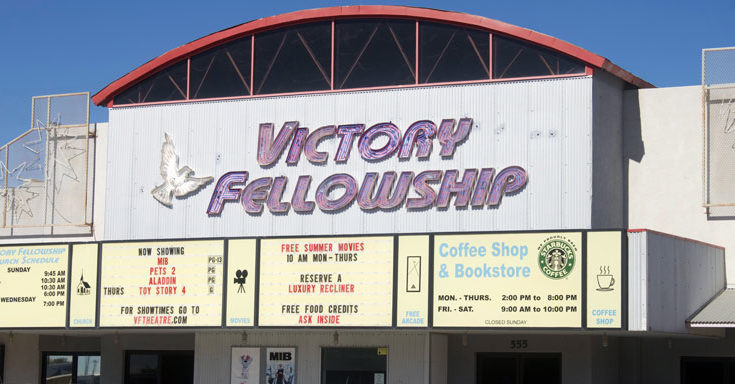 Jon Johnson File Photo/Gila Herald: The Victory Fellowship Church will be rebranded as The Way Safford and will be under The Way World Outreach.

“We’re doing everything we used to do but we’re going to do it better.”

SAFFORD – The Victory Fellowship Church has partnered with The Way World Outreach and will rebrand as The Way Safford.

The building is located at 555 Entertainment Ave. and also houses the Victory Fellowship Theater, which will continue operations albeit with a fresh look. The property will be remodeled, including inside and outside.

The World Way Outreach was founded by senior pastors Marco and Liza Garcia in San Bernardino, California. Pastor Robert and Veronica Cuencas will take over as the senior pastors in the new Arizona location. Robert Cuencas told the Gila Herald that he has moved his family to the area (Pima) and is excited to help the community.

He said The Way is an outreach church and its “Adopt a Block” outreach team is currently at the Gila River Apartments for the next month assisting people there. He said they delivered some baby clothes to a mother in need and is assisting a grandmother of six.

“That’s what we do,” Robert Cuencas said. “We come into a community or city and our whole purpose is to find needs and meet them.”

Victory Fellowship Church Pastor John Neal said a group from The Way World Outreach had been coming from California to help with the church’s ministries for the past seven years and an outreach pastor asked about becoming a more permanent fixture.

“After the last time we had the drive-through Christmas thing where we gave away all the toys and did all the stuff, I was sitting down having coffee with the main guy and he said, ‘Hey why don’t you let our church come out and help you guys out and we’ll bring out a pastor and kind of take over and take it to the next level,’ and I was like ‘Yeah, let’s do it.’ And I shocked him because he wasn’t really expecting me to say that.”

The Way is based mostly in the inner cities and Pastor Robert Cuencas said it was Neal who actually reached out to join and take over the property. Robert said while Safford wasn’t really on the church’s vision, after visiting he fell in love with the area and felt it was something he needed to do.

The programs the church previously ran will continue, according to Neal, as will the movie theater’s operations – including during the renovation. Currently, the theater also offers free movies to children at noon, Mondays through Thursdays.

Neal said while he is taking a secondary role to the new Senior Pastor Robert Cuencas, he will still be around assisting with the ministry.

While they would like to continue to grow, when asked about the neighboring 14-acre property which was formerly the mini-golf Swings-N-Things, Neal said while he hopes the veterinarian who currently owns the property can work his differences with the city out and open for full operation, if he isn’t able to the church would be interested in buying the property to refurbish and reopen the mini-golf.

Pastor Robert Cuencas saw the property next door and thought the same thing.

“Whatever needs that we find here, we’re going to try to meet it,” Robert Cuencas said. “I already made a call into the YMCA saying, ‘hey you guys need a YMCA in this area . . . We need more stuff for kids. I see that miniature golf place and we’re making calls on that right now to see if we can negotiate a deal with him and we can reopen the mini-golf. It’s finding the needs and meeting them. Whatever the needs are, we’re going to try to find a solution to the challenges because every challenge has a solution if we all put our heads together.”

The city of Safford was offered the Swings’N Things property at 380 N. Entertainment Ave. in 2018 for $385,000 but declined. In addition to an existing building, the property formerly ran a putt-putt golf course, batting cages, driving range, parking lot, and an existing well to water the grass. The facility closed in 2006 and had been up for sale ever since. It was eventually purchased by a veterinarian, who informed the Gila Herald that he is now nearly ready to open after going back and forth with the city for nearly four years.