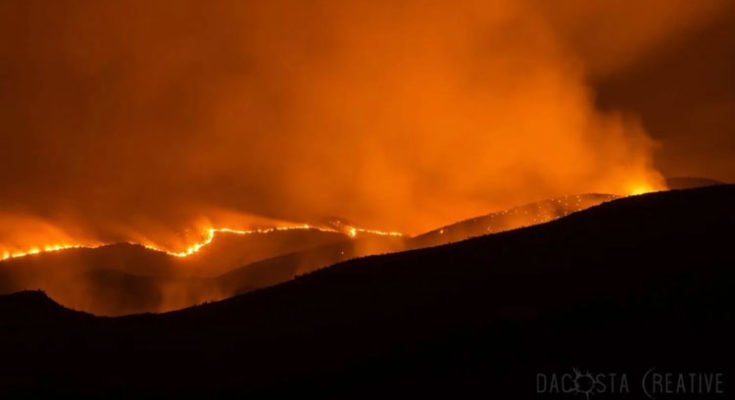 Photo By Steve DeCosta: This was the view of the Woodbury Fire from the Roosevelt Lake area.

SUPERSTITION MOUNTAINS WILDERNESS – Technology aided firefighting efforts Tuesday and Wednesday as an Unmanned Aircraft System is being utilized to fly over the Woodbury Fire’s eastern border to scout for hot spots. After the hot spots were detected inside the fire’s perimeter Tuesday, helicopter drops combined with firefighters on the ground building line helped thwart the blaze.

The human-caused fire has grown to 123,263 acres as of Wednesday morning and is the sixth-largest wildfire in the state’s history.

Burn out operations continue to help build a defensible perimeter around the fire, and residents who were previously evacuated last Thursday were allowed to return home Tuesday at 11 a.m.

The fire is burning in a mosaic inside the perimeter and with interior pockets of fuel still available, the increased wind is expected to make smoke noticeable throughout the week.

Smoke from a new blaze, the Gap Fire which started shortly after noon, Tuesday, erupted on the San Carlos Apache Reservation near Point of Pines and Hooker Gap. That blaze grew quickly and air response was swift with multiple aerial vehicles assigned to battle it, including two air tankers, four SEAT airplanes, and a T1 helicopter. A Type-1 crew was also assigned to the fire.

The fire grew to 13,000 acres by 5 p.m. aided by gusty winds and dry grasses. The cause of the fire is under investigation but it may have started by a truck’s exhaust while off-roading through dry brush.

There was zero percent containment as of Tuesday evening gut to structures had been lost. However, one ranch, R100 near Arsenic Tubs, is threatened, according to a release from the San Carlos Apache Tribe.

Nearly 100 local firefighters, including hand crews, engines, a water tender, and support personnel, are assigned to the Gap Fire and crews worked through the night to build containment lines.

Smoke from both the Gap Fire and the Woodbury Fire is expected to drift north today. Additionally, the public is encouraged to use caution while driving Route 8 in the Hooker Gap area due to fire personnel traffic.