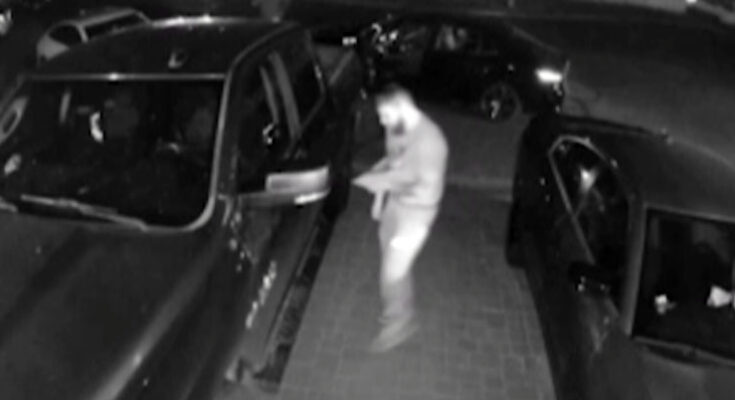 Contributed Photo: Victims are asking the public’s help in identifying two men shown on video door-checking vehicles near where a vehicular burglary occurred.

SAFFORD – Victims are asking the public’s help in identifying two men of interest for questioning regarding a vehicular burglary.

The burglary took place in the Copper Canyon subdivision in eastern Safford overnight between Saturday, April 10, and Sunday, April 11. According to a Safford Police report, a respirator system valued at $2,000 and needed for the victim’s employment was stolen out of his work truck. Additionally, the perpetrator(s) also took a bag of Voyager wrenches from the vehicle and a Yeti cooler from the back of the truck.

A video from a nearby neighbor’s Ring doorbell camera that was taken at about 2:30 a.m. on Sunday showed two men pull up in a dark-colored sedan. The men get out and one puts his shirt over his hands (perhaps to avoid leaving fingerprints) and performs what is commonly known as a “door check” on a truck parked in front of the residence. A door check is just as it sounds and is the action of a would-be thief checking random vehicles for unlocked doors to gain easy access. After the truck, the man then did the same thing on a car in the driveway and then returned to his own car after finding both vehicles locked.

The video shows the second male door check other vehicles along the street. The pair then move on down the street.

The case was forwarded to investigations to follow up with possible charges including theft and burglary in the third degree. Anyone with information regarding the theft or the two men in the video should call the Safford Police Department at (928) 432-3100.