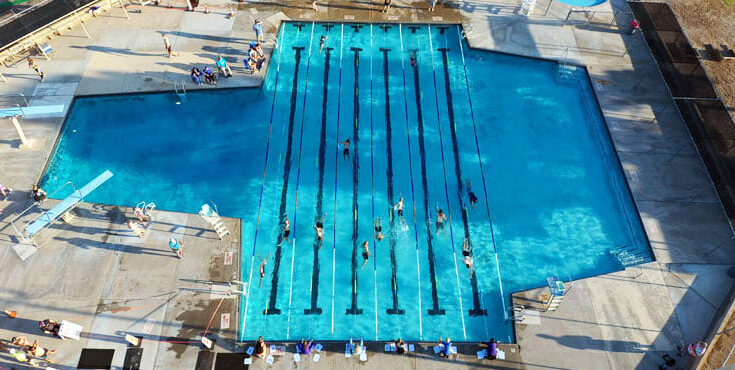 Jon Johnson File Photo/Gila Herald: The 13th annual Tri Community Tri had a new record of signups since being taken over by Brian and Angela Paull. This picture shows swimmers during the 2021 event.

PIMA – The 13th annual Tri Community Tri triathlon was held in Pima on Saturday, continuing the tradition for another year.

“It went really well,” Brian Paull said. “We had the most signups that we’ve had so far. So, it keeps growing. We’re happy to see all the local people come out and do what they enjoy.”

According to the race’s official timer, CEP Timing, 130 racers competed in this year’s event.

The event is a sprint distance triathlon held in Pima, Arizona. After braving the chilly Pima Pool for a 425-yard swim, racers hopped on their bikes stationed right outside the pool gates for a 15-mile ride. The bicycle route took competitors through town to the outskirts with rolling hills and beautiful views of majestic Mount Graham. The racers then dismounted at the same bike staging location and completed the event with a 5K run through town, finishing under the big inflatable finish line with the crowd cheering.

Melinda Nelson owns this event, and the shipshape runner bested her competition by more than 7 minutes and finished in 1:24:18 for her fifth career overall female first-place finish.

On the men’s side, Jack Hackett crossed the line first in a time of 1:10:27, followed by Daniel Pearce in 1:11:29 and Ross Platt in 1:15:19 for third. Hackett is a senior at Safford High School and is set to graduate in December with hopes of running cross country in college. He also recently took first place in the 5K on the Runway at the Safford Regional Airport.

Record holder and multi-race champion Bobby Gonzales, of El Paso, was unable to make the race this year due to a broken collarbone suffered in a riding crash.

Co-race director Brian Paull got to race this year for the first time since taking over the event and finished solidly in the middle of the pack in 1:34:17.

In the Super Sprint race for the females, Vonda Salmon took first in a time of 43:25, followed by Danielle Oliver at 45:16 and Esther Seibold at 52:38.

For the males, Jackson Paull blew away the competition and finished first in the Super Sprint in a time of 44:05. He was followed by Nicholas Renteria in second place at 54:47 and Andrew Turley in third at 54:41.

Brian and Angela Paull wished to express their gratitude to all the sponsors and volunteers who make the event possible.

“As always, we can’t do the event without them,” Brian said.