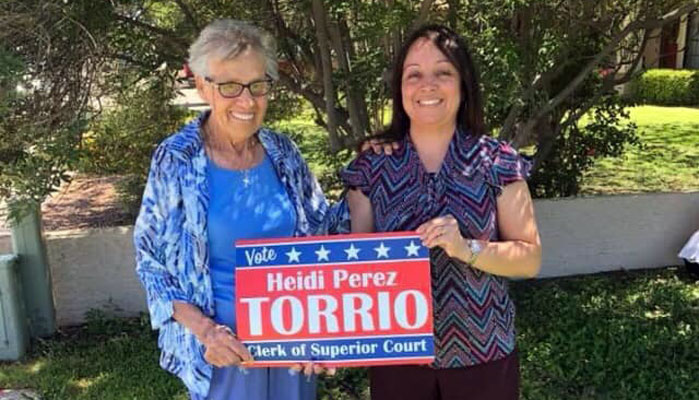 SAFFORD – Twice was the charm for Heidi Perez Torrio as the Gila Herald has called the special election in her favor. Torrio was victorious on election night and will be the next Graham County Clerk of the Superior Court.

“I’m so excited,” Torrio told the Gila Herald. “I have tears of joy.”

Torrio was victorious by besting fellow challenger Marianne Clonts and incumbent Cindy Woodman. Torrio received 3,610 votes compared to 1,453 for Clonts and 292 for Woodman. A total of 5,375 votes were cast, however, 12 votes were overvotes and three were undervotes, so the total registered so far was 5,375 with five votes being for write-in candidates. There are roughly 200 early ballots and provisional yet to be counted but that will not affect the outcome. Voter turnout for this election was about 28 percent.

The Board of Supervisors will canvass the election results at its Monday June 1 meeting to make it official and then Torrio will start her new assignment. For tomorrow, however, she will be right back at the Graham County Probation Department from which she had to take a three month leave of absence to be a candidate.

“I’m going right back to work tomorrow to take care of what I need to there and then be ready to go June 1,” Torrio said.

Most of the voters stayed away from the polls during the COVID-19 pandemic, with an overwhelming amount preferring to vote early, mostly by mail-in ballot. Still, volunteer poll workers were out at nine separate sites in Graham County to make sure everyone had a chance to vote. The special election was funded by a $30,000 transfer from the county’s contingency funds that were approved by the Graham County Board of Supervisors.

The recall election came to be after the Committee for the Recall of Cindy Woodman as Graham County Clerk of the Superior Court dropped off 3,147 signatures in favor of the recall to the Graham County Elections Department on Nov. 18, 2019. Since the committee only had to gather 2,697 signatures – which is 25 percent of the 10,786 total votes cast in the 2018 election which Woodman won – the Graham County Recorder’s Office verified 2,800 signatures and then stopped. Graham County has approximately 19,000 registered voters.

Former dental hygienist Woodman ran on the Republican ticket in the November 2018 election and bested her then-Democratic opponent, Heidi Torrio, 55 percent to 45 percent with about 1,000 more votes out of the roughly 10,786 ballots cast. She later came under fire for reportedly mishandling evidence in a felony case, her apparent inability to learn the position, and has been blamed for an exodus of clerks from her office since she began in January among other accusations of ineptitude.

It was Graham County Superior Court Judge Michael D. Peterson who wrote a letter to Arizona Supreme Court Chief Justice Robert M. Brutinel that began Woodman’s removal from the court and ultimately placed her out in Justice of the Peace District 2.

Woodman was relieved of her duties on Oct. 11 with the issuance of the Supreme Court of the State of Arizona’s Administrative Order No. 2019-123. Chief Justice Brutinel stripped Woodman of her duties and instead turned the oversight of the day-to-day operations over to Judge Peterson.

After the signatures for the recall were verified, Woodman had until Jan. 30 to resign from her position. Since she did not notify the Elections Department of her choice by that date, the process moved forward and Torrio and Clonts qualified for the ballot.

With the victory, Torrio will be thrust into budget discussions as the fiscal year ends in June.

Torrio said she would like to follow her mentors Amelia Sainz and Darlee Maylen and stay in the position for the rest of her career. She said while it was a risky undertaking having to take the time off from work, it was her family support that sealed the deal for her.

“It was the support of my family, my husband and my kids,” she said. “My kids said, ‘do this mommy. This is what you wanted. We’ll take care of you.'”