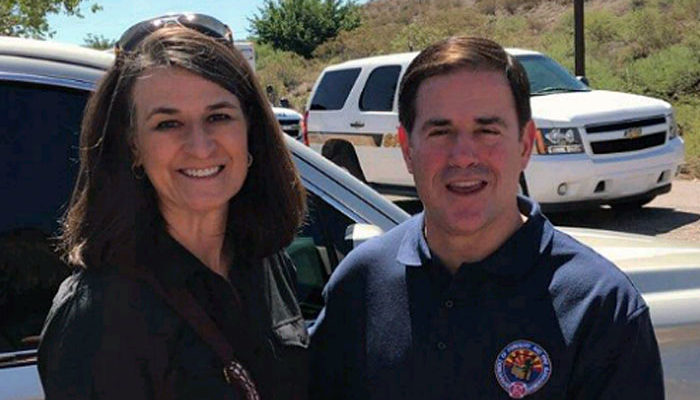 Contributed Photo: Cindy Woodman, shown here with Governor Doug Ducey, has been stripped of her duties by the Supreme Court of the State of Arizona.

Additionally, Woodman may only report to the Graham County Courthouse at Graham County Superior Court Judge Michael D. Peterson’s behest and is essentially excluded from the courthouse unless specifically approved by Judge Peterson to return.

Arizona Supreme Court Chief Justice Robert M. Brutinel met with Woodman on Friday and reportedly issued an ultimatum that she either resign or face possible charges regarding her handling of evidence in the case against Manuel Campos and the possibility of her committing perjury during questioning about it while under oath. If she resigns, Arizona Governor Doug Ducey will be tasked with appointing Woodman’s replacement.

Woodman was expected to issue her resignation Monday but declined to do so. However, in Administrative Order No. 2019-123 issued Friday, Oct. 11, Chief Justice Brutinel stripped Woodman of her duties and instead turned the oversight of the day-to-day operations over to Graham County Superior Court Judge Michael D. Peterson.

In the order, Judge Peterson will have total administrative control and oversight of the clerk’s office, including having the authority to reassign the duties of the Clerk of the Court and all personnel, manage court and financial records, revoke signing authority on any governmental bank accounts and to access computer systems and to expend funds budget for the office.

In his order, Chief Justice Brutinel wrote that the “action is necessary to restore proper operations of the Clerk’s Office in Graham County.”

Judge Peterson will also be tasked with recommending candidates to be designated Lead Clerk, who will then take over all functions “assigned by law or rule to the Clerk of the Superior Court in Graham County,” thereby making the elected position moot. In essence, Chief Justice Brutinel has effectively removed Woodman from her position and has instructed Judge Peterson to recommend candidates to replace her until it is determined if Woodman can return.

“It is further ordered that, though Ms. Cindy Woodman remains Clerk of the Superior Court, she shall perform only duties assigned to her by Judge Peterson, to be performed at a location he designates. Duties assigned to the Clerk may be limited to non-court related functions such as issuing passports and may include attending educational and training programs to acquire the knowledge and skills required to competently perform the functions of the Office of Clerk of Superior Court.”

Chief Justice Brutinel met with Woodman on Friday after receiving a letter from Judge Peterson earlier in the month which outlined several aspects of Woodman’s ineptitude for the job, including creating a hostile workplace (including slapping a deputy clerk on her posterior), code of conduct violations, conflict with staff resulting in the resignation of seven of eight deputy clerks who were there prior to Woodman taking office in January 2018 and two more who were hired afterward, failure to accept payments for probation, failure to provide appropriate cross-training for deputy clerks, mishandling of evidence in the Manuel Campos felony case, failure to provide courtroom clerks for duty, incomplete filing, unreasonable delays in minute entries, harassment of excused juror Tom Green, and diverting the judge’s time.

Judge Peterson also stated that efforts to fix the problems have failed and that Woodman refused to take advantage of training provided to her.

“Ms. Woodman has not availed herself of management and leadership training opportunities; she did not utilize a ‘mentor’ clerk to assist her . . . and she has failed to act as directed in my meeting with her on August 29, 2019. Ms. Woodman steadfastly maintains that the problems that exist in the clerk’s office and the consequence for the judicial function are not her fault and are therefore not within her capacity to correct.

In consideration of the foregoing, I submit that there is conclusive evidence that Ms. Woodman is unwilling or unable to perform her duties as clerk of the court. Ample time has passed since Ms. Woodman was unequivocally made aware of the systemic problems which plague the clerk’s office. She has completely failed to acknowledge responsibility for her actions and has utterly failed to remedy the problems. Instead, these problems have increased to the extent that they have seriously impacted the judicial function of the court.”

Judge Peterson recommended Woodman take the time she now has free to attend counseling, leadership, and management training, as well as on the job training on each of the functions of the clerk’s office that will provide her the opportunity to demonstrate competency of the office.

A recall petition was previously filed against Woodman on Sept. 3 and has until January 2020 to gather 2,697 signatures. The recall effort was filed by The Committee for the Recall of Cindy Woodman as Graham County Clerk of the Superior Court. The committee lists its Chairman as Darlee Maylen, with its Treasurer as Amelia Sainz – the two women who previously held the position of Graham County Clerk of the Superior Court for the previous 39 years prior to Woodman being elected in 2018.

Woodman ran on the Republican ticket in the November 2018 election and bested her Democratic opponent Heidi Torrio, 55 percent to 45 percent, with about 1,000 more votes out of the roughly 10,786 ballots cast.