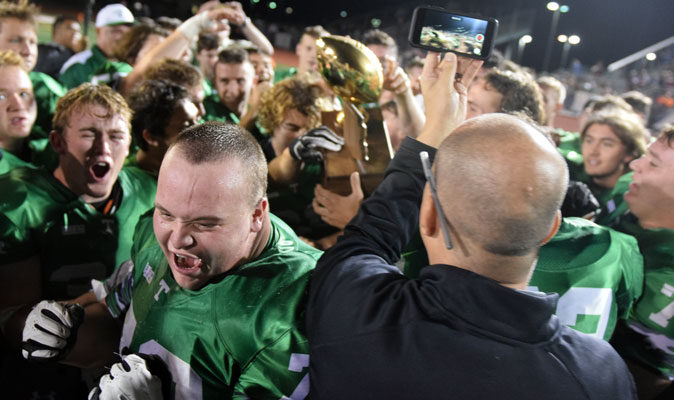 GILBERT – Just one week at a time. That was the mantra for the Thatcher Eagles’ football team and that’s what they did all season long as they dispatched every opponent. The No. 1-ranked Eagles capped their perfect unbeaten season by capturing their third consecutive 2A State Championship on Saturday, with a 35-12 win over the No. 3-ranked Round Valley Elks.

“Round Valley is a good team,” Thatcher head coach Ramon Morales said. “Congratulations to them but we wanted to make a statement and, hopefully, we did. It was an ugly game but we’ll take it.”

A dominant season had a dominating end as the Eagles held the Elks scoreless until the fourth quarter. While the Eagles are a dominant, running team, it is the intangibles – the special teams play, the big plays, the turnovers and such, that make them truly a special team.

After Round Valley’s initial drive stalled, Thatcher took its first drive straight down the field. After some good-sized runs, quarterback Jack Kortsen burst loose around the right side and beat the Elks to the edge to go 42 yards for the game’s opening score.

Kortsen was directly involved in four of the Eagles’ five touchdowns on the night and had two rushing touchdowns, a third on an 84-yard fumble recovery, and he also threw a 59-yard TD to Quinton Turley from a punt formation on fourth down.

“It was a dogfight from the beginning, well, the whole game it was,” Kortsen said. “But we settled down; we came together and we executed.”

Round Valley initially came right back, however, as quarterback Kason Woolf showed off his wheels down the left end. It looked like Woolf might score, but Trace Goodman had the angle and managed to push him out of bounds at the 12.

Thatcher’s bend but don’t break defense then went into effect and forced a fourth down. The Elks elected to go for the field goal on 4th-and-10 from the 12, but big Cole Motes blocked the kick and Riley Morris picked up the ball and returned it into Elks territory.

Morris was severely injured on the play, however, as his ankle was dislocated on the tackle. He immediately pointed to his ankle, which was dangling in a way an ankle should not dangle, and he attempted to hop to the sideline until team trainers had him lie back down. Morris was initially fitted with an air cast, but was then given a splint and was taken to a local hospital. X-Rays showed no fractures, and he returned to a hero’s welcome as he utilized crutches to get back to the sidelines to cheer on his teammates.

The game was still tight in the second quarter when Thatcher had to punt from its own end zone. Round Valley was moving in for the tying score utilizing a “Wildcat” formation when Tayvin Bevell lost the ball while being tackled by Quinton Turley. Kortsen was Johnny on the spot as the ball bounced right to him and he quickly spun out of a tackle and then took it up the right sideline 84 yards to put Thatcher up 14-0 after Conner Russell’s extra-point conversion.

“I was at the right place at the right time and I got a lucky bounce and I picked it up and I was off to the races,” Kortsen said.”

Another scary injury happened on the first play after the kickoff as L.J. Foster falls down in his block attempt and a pile of Eagles and Elks fell down on him. Taylor was down on the field for roughly 30 minutes until EMS arrived and placed him on a stretcher. He was then taken to a local hospital. The word from the AIA is that Foster had movement in his arms and legs and that the stretcher was used as a precaution. One has to wonder, however, why was there no EMS at the scene for the game? Every game we’ve covered in the Gila Valley always has some sort of paramedics on duty for the game and the same is reportedly true for Round Valley, but in the 2A State Championship game, none were there until called.

After the lengthy delay, the teams picked up where they left off and the Elks drive was stopped when Woolf and Alex Martinez-Hernandez collided into each other on a failed hand-off attempt.

Still, the Elks defense held the Eagles in check again and Thatcher lined up to punt. Someone forgot to cover Turley, who was lined up wide left, and Kortsen recognized it and called the hot read. Kortsen, who to that time had not completed a pass in the game, got the ball to Turley, who made one defender miss in space and went 59 yards for the touchdown.

“I (saw) an extra guy right here and the coaches were yelling but I didn’t want to look over there so they wouldn’t move over there, so I just hiked it and boom, sent it real quick.”

Offense begets defense and defense begets offense as the Eagles appeared fired up after the fake punt touchdown. Trace Goodman had a big hit on Alex Martinez-Hernandez, who somehow managed to hold onto the ball; and Collin Thompson harassed Martinez-Hernandez a couple of plays later into a loss of yardage. Coach Morales’ strategy of taking his time-outs while Round Valley was still on offense paid off and Thatcher had a little bit of time left on the clock before halftime. The team wouldn’t need all of it.

Two plays after the Elks punted, Brock Jones took the inside handoff and then busted it outside down the right sideline for a 42-yard score. The Eagles then jogged happily to their locker room for halftime up 28-0.

The second half was a slower pace than the first as Thatcher began to run out the clock. The Eagles scored their last touchdown after converting a 4th-and-1 and utilized the same “Big Ben” formation for a Kortsen TD dive from just inches away from the end zone.

The Elks avoided the shutout when Turley just missed an INT and Bevell took it down the sideline for six. With time running out in the fourth quarter, Woolf added a 4-yard TD to make the score 35-12, but by then all the Thatcher faithful were already celebrating the three-peat.

“These kids deserved it,” Thatcher head coach Ramon Morales said. “They worked their tails off. They kept in focus. We knew what the ultimate goal was but – you know, I’ve said this many, many times – we just try to take it one week at a time. And even this week that’s what we did.”