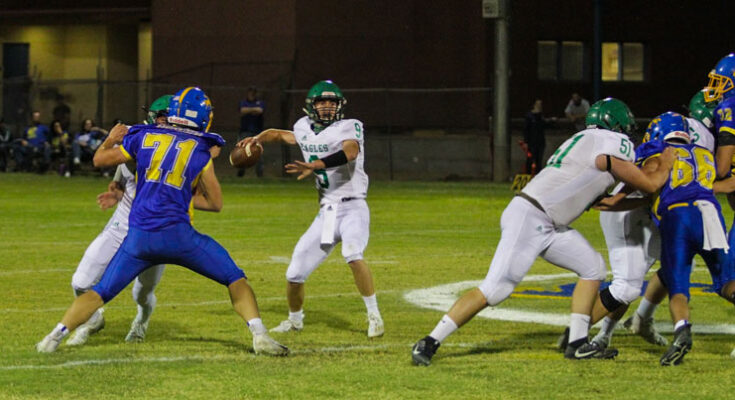 File Photo By Stan Bonifacio: Thatcher’s Mark Wren drops back for a pass against Pima in the first game of the season. Wren was presented with the Graham Canyon State Gridiron Club’s inaugural Impact Award at its Ed Doherty Awards luncheon on Saturday.

PHOENIX – Student-athletes generally wear a lot of hats. They are – by definition – students and athletes of course, but they often are much more; providing inspiration to others, service to their communities, and being generally impactful in a positive way to those around them.

The Grand Canyon State Gridiron Club felt nobody better exemplified that type of student-athlete this year than Thatcher football player Mark Wren, and awarded him with its inaugural Impact Award during its awards luncheon on Saturday, in which it handed out the Ed Doherty Award for the best football player in the state.

Wren started this season at quarterback, a position he played the entire previous season. He then switched to running back and exploded with ludicrous offensive numbers. His stats were so impressive, he was nominated for the GCSGC Ed Doherty Award for outstanding play and was later presented with his Nomination Medallion prior to the rivalry game against Safford – which Thatcher won, 27-14, to give Wren a four-year sweep against the rival Bulldogs.

However it wasn’t just his play on the field that was recognized at the luncheon on Saturday, but for his actions off the field.

Wren was the driving force that initiated the Save-a-Skyler anti-bullying program that took off in the Gila Valley, with Red-Out events, Buddy Benches, and programs at multiple schools in various school districts to address the problems with bullying. Wren lost his older brother, Skylar, when bullying became too much for Skylar to bear, and he made it one of his goals to share his family’s story (with his mom, Patti Wren, putting in a lion’s share of work to the movement as well) to those to try to help those in need and avoid another such tragedy.

A total of 53 outstanding players from 2A – 6A were awarded medallions and were Ed Doherty Award nominees, with five finalists – including Santa Cruz’s Hunter Ogle representing the 2A – in attendance at the luncheon. Mesquite’s Ty Thompson – a 5-star, All-American recruit who led Mesquite to two consecutive 4A Championships and will play next year for the University of Oregon – took home the award for the best player in the state this year. However, with his combination of athletics and commitment to his community, Wren may have just been the best football person.

The Grand Canyon State Gridiron Club is the steward of the Ed Doherty Award and is the most meaningful advocate of high school football in the State of Arizona. The mission of the Grand  Canyon State Gridiron Club is to represent Arizona amateur athletics by bringing national attention to the extraordinary qualities of our young people and serve in the pursuit of athletic achievement, academic advancement, and greater social affinity.

About the Ed Doherty Award

For 34 years, the Ed Doherty Award has been the State of Arizona’s highest individual high school football honor and is awarded annually to the state’s most outstanding high school football player by the Grand Canyon State Gridiron Club. The Ed Doherty Award recognizes the player whose performance best exhibits the pursuit of excellence with integrity. The winner of the award epitomizes great ability combined with diligence, perseverance, and hard work. In addition to on-field performance, the Ed Doherty Award recognizes the well-rounded accomplishments of community involvement, school pride, and academics.