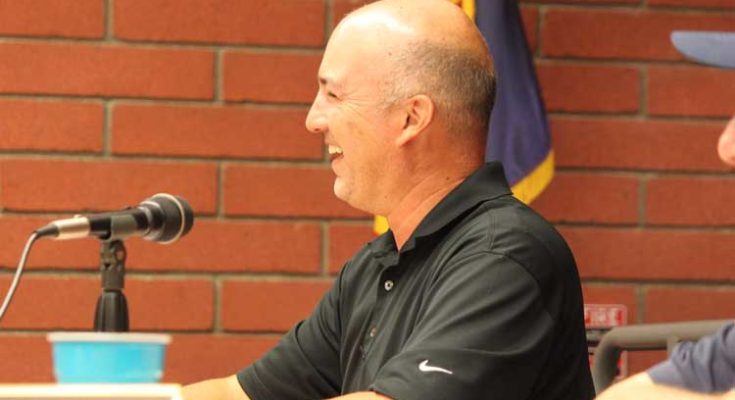 Jon Johnson Photo/Gila Herald: Thatcher’s Heath Brown smiles during the council meeting Monday night. The council unanimously voted to award Brown a temporary raise while he performs as both the town engineer and interim town manager.

THATCHER – Working two jobs for the town of Thatcher, Town Engineer and now Interim Town Manager Heath Brown was rewarded for his willingness to take on the extra assignment with a temporary 12.1-percent wage increase Monday night.

The Thatcher Town Council unanimously approved the increase for Brown, who had been doing double duty for the town since former Town Manager Terry Hinton left his position. Click here to read the Gila Herald’s article that broke the news of Hinton’s departure.

Hinton resigned from his position after an evaluation of his performance during a Thatcher Town Council executive session April 16 led the council to decide not to renew his contract. Hinton had been with the town for 21 years as town manager and had received high marks for his service in the past.

Hinton went on vacation after the April 16 meeting and Brown was appointed as interim co-manager with Hinton during a special meeting April 18, with the intention of Brown becoming the interim town manager starting July 1. Hinton was supposed to stay working through June 30 – which was the end of his contract – according to Mayor Bob Rivera.

However, Brown has been the sole interim town manager since May, as Hinton did not stay in his position.

The new increase for Brown will pay him an additional $600 per paycheck for the added workload of handling both jobs. Thatcher still has to search for a new town manager, and will likely do so with the help of the Arizona League of Cities and Towns. Brown’s increase is on par with what Hinton was making when he left his position and will remain until he no longer is performing the two separate jobs.