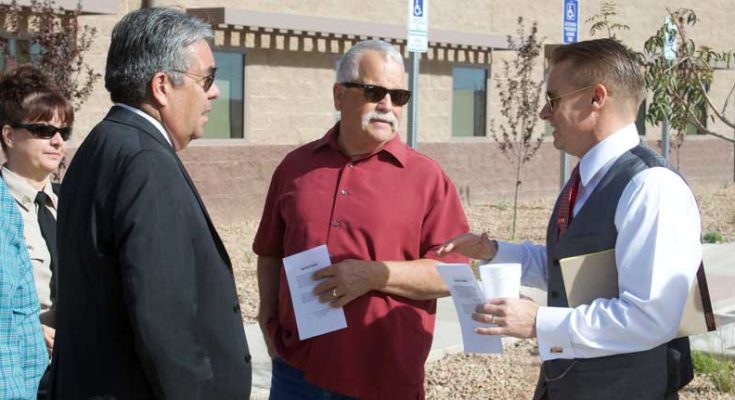 Jon Johnson File Photo/Gila Herald: Thatcher Town Manager Terry Hinton, center, shown here at the opening of the Graham County Adult Detention Facility, did not have his contract renewed after an executive session evaluation by the Thatcher Town Council on Monday night. Hinton’s resignation was accepted, but he will reportedly remain at his post until the end of June.

THATCHER – More change is coming to the town of Thatcher as the town council unanimously voted Monday night to accept the resignation of Thatcher Town Manager Terry Hinton. After an evaluation of Hinton’s performance during executive session, the council decided it would not renew Hinton’s contract next year. Hinton then made the decision to resign.

Hinton will remain in his position until the end of the fiscal year through June 30, according to Thatcher Mayor Bob Rivera. Hinton was at the Monday night meeting but has since gone on vacation and was not immediately able to be reached by the Gila Herald for comment.

Hinton has served nearly 21 years as town manager and has received high marks for his service in the past. Just two years ago, Hinton was praised for his ability to balance the budget and satisfy the needs of the town, including improving its recreational facilities, such as the town’s splash pad park and skate park. At that time, Hinton was granted a merit and cost of living increase in salary.

The tone was different Monday night, however, and after an evaluation done in executive session, the Thatcher Town Council decided it would not renew Hinton’s contract for another year.

“We appreciate all he has done,” Mayor Bob Rivera said.

The town will now begin its search for a new town manager and will do so with the help from the Arizona League of Cities and Towns, according to Rivera.

This article was updated at 5:47 p.m. after the Gila Herald received an amended comment from Thatcher Mayor Bob Rivera.