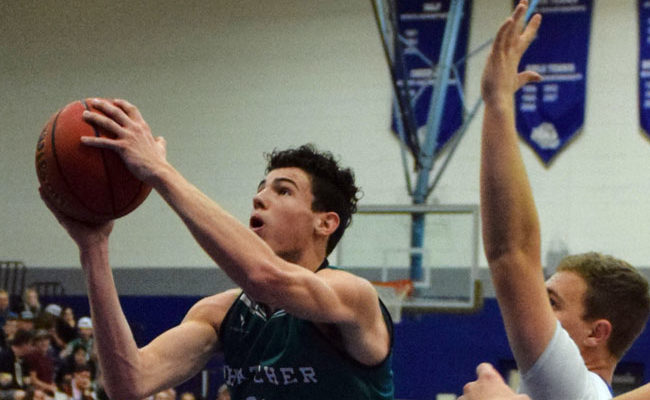 Raymundo Frasquillo Photo/Gila Herald: Rulon White goes up for two of his game-high 21 points against Safford on Friday. The Eagles prevailed 67-61.

Thatcher follows up against Safford by taking out No. 1-ranked 3A Chandler Valley Christian in overtime, 65-63

SAFFORD – A back-and-forth game went down to the wire Friday night, with the Thatcher Eagles getting the last laugh over the Safford Bulldogs, 67-61.

The Eagles (13-7 overall, 4-1 region) rallied behind big games from Rulon White, who scored a game-high 21 points and Matt Palmer (14 points), who iced the game with 6-6 free throws in the fourth period.

“I think we’re very fortunate to win honestly,” said Thatcher head coach Chris Riehemann. “They do a really good job of spreading you out and trying to attack the basket. I thought there were a lot of times where our help side defense wasn’t very good. But credit our guys in the fourth quarter. They got stops when we really needed them. Kason (Crosby) made a big play for us when the game was tied and he kind of had some tough breaks tonight.”

Safford (10-4 overall, 0-0 region) had a shot to take the lead with 18 seconds left in the game, but Trett Wiltbank’s corner baseline 3-pointer rimmed out and Palmer secured the rebound. Safford hadn’t played since the Eastern Arizona College Holiday Tournament prior to the Christmas break, while Thatcher played seven tough games in the White Mountain Holiday Classic at the end of the year.

The Bulldogs had a good team effort with three players scoring in double figures led by Andrew Smith with 17, Jejdrique Chavez with 11, and Trett Wiltbank with 10, while Dom Gutierrez and Keegan McKinney both scored 9 each.

Safford head coach Terry Williams praised his team’s performance and said he believed they are a better team after having played the game.

“I think that was actually our best effort this year as far as diving for balls and getting stops when we needed them,” Williams said. “We didn’t get enough of them, but I’m proud of my guys.”

Both teams found the bucket early and often and played to an 18-18 stalemate after one period of play.

The even matchup continued in the second period, as both defenses stepped up and Safford only had one lone 3-pointer by Mason Duros and Thatcher only had two field goals in the first four minutes of the period.

Safford took advantage of a couple of Thatcher misses ahead with some assists from Dom Gutierrez and Jejdrique Chavez, who both found Keegan McKinney for scores.

Gutierrez then hit a big 3-pointer, but Thatcher’s Kason Crosby came right back with a long ball of his own right before the halftime buzzer to cut Safford’s lead to 34-31.

The teams continued to go at each other in the third period as Andrew Smith and Palmer exchanged 3’s. White had another big period with 10 points in the third to give Thatcher the lead.

“You always gotta have a positive mindset and just know that you just gotta have a lot of confidence out on the court,” White said. “But it all just comes down to your teammates passing the ball around and good ball movement.”

After Chavez tied the game up at 45 by beating Cole Motes to the baseline off a pick play, Duros lost track of Michael Greer, who hit 2 of his 9 points on the layup to retake the lead. White followed that up with a 3 from the left side after Crosby found him in transition after a Chavez miss. And after Chavez stepped out of bounds with 3 seconds left in the period, Thatcher inbounded to White who took a few dribbles across half court and banked in a deep three near the Bulldog mural at the buzzer to put Thatcher up 53-45 heading into the fourth.

Smith brought the Bulldogs back by hitting two 3-pointers and a big runner in the period, but a deep Motes jumper and four consecutive free throws by Palmer returned the lead to Thatcher, 61-59.

“We started out rough, but (there were) a lot of runs,” Smith said. “I think the key thing to the game was Thatcher got the last run of the game.”

The Bulldogs had several shots at the goal and, eventually, Epoch Frye hit his only bucket in the game to tie it up with under a minute to play. Thatcher immediately took the ball down the court and Crosby found an open seam for a layup with a foul call.

With the Eagles up 63-61, Crosby missed his free throw attempt and the Bulldogs had a clean look at a 3-pointer by Wiltbank.

“It could have gone either way,” Williams said. “It went down to the wire, and that’s what we hope for. But, I’m proud of my guys and I’m looking forward to the second half of the season.”

Palmer and Motes iced the game for Thatcher by hitting two free throws each in the waning seconds of the contest.

“I’ve been doing this for a while, so, you know, I just didn’t think about it,” Palmer said. “If I had thought about it, I probably would have missed it.”

“Any time you play your rival you’re happy to get a victory out of it,” Riehemann said. “They got us a month and a half ago at our place, so it’s nice to come back and get this one tonight.”

After beating one 3A powerhouse in Safford on Friday night, the Eagles went back on the road the next day to Chandler to face the Valley Christian Trojans who are ranked number one in the state in the 3A division.

After playing to a 14-14 stalemate in the first period, Thatcher began to pull away with big-time plays from its core group of Motes, Crosby, Palmer, and White, as they ended up building a 16-point lead, 52-36, heading into the fourth period.

The Trojans came back with the long ball and tied the game 57-57 at the end of regulation. After being down early in overtime, the Eagles clawed back and outlasted the Trojans, 65-63, for the big road victory.

The Eagles will next host the Pima Roughriders (8-6 overall, 4-1 region) on Tuesday, Jan. 8. While the Eagles have been flying high against non-region opponents in higher divisions, they will likely have to beat Pima and then take out Morenci on the road Jan. 15 to claim the region title.