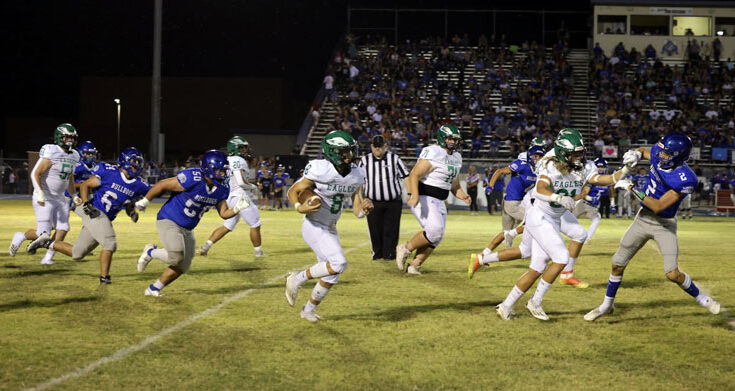 Photo By Stan Bonifacio: Thatcher’s Brandon Napier runs for a score against Safford. Thatcher will take on Pusch Ridge for the top spot in the 3A South on Friday night.

GRAHAM COUNTY – The undefeated Thatcher Eagles will begin the meat of the 3A South schedule on Friday as they host the Pusch Ridge Christian Academy (PRCA) Lions.

Sabino will host Safford on Friday and should be favored in that matchup.

The Thatcher Eagles started their season with a 42-14 walloping of the Round Valley Elks on Aug. 19, came back for their most thrilling win of the year over Eastmark 31-30 on Aug. 26, held the tough 2A Pima Roughriders out of the end zone for a 19-0 victory Sept. 2, and defeated their rival school, Safford, 40-2 on Friday night.

According to Max Preps, the Eagles are led by quarterback Brandon Napier with six rushing and two passing touchdowns on the season. Ayden Bingham leads the rushing attack averaging 110.3 yards per game (an outstanding 9.8 yards per carry), while Cody Jones is the top-rated receiver averaging 23 yards per game with two total receiving TDs. Jones also has the most sacks in the 3A South with four and is second on the team in averaging 4.8 tackles per game behind defensive end Jacob Rasumussen, who is averaging 6.3 tackles per game.

Defensively, middle linebacker Tyler Mustain leads the team with an incredible 13.6 tackles per game average and Bryce Jewel leads the team in both interceptions (4) and receiving TDs (5).

Safford will look to stop the hemorrhaging against Sabino, but the game the week after against Palo Verde Magnet at home is the better bet to right the ship.