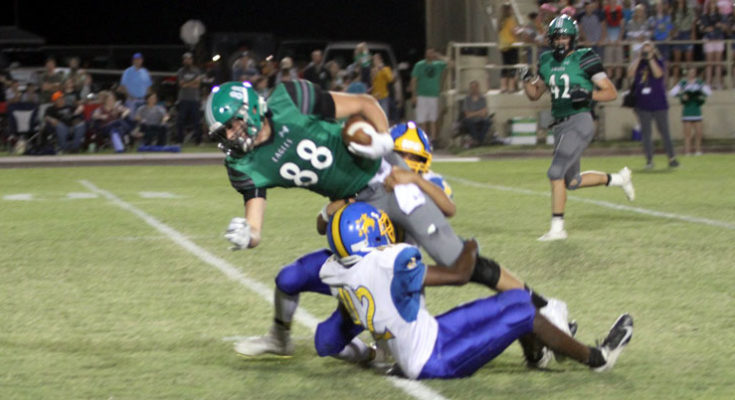 File Photo By Stan Bonifacio: Cole Motes makes the catch against Pima during an earlier game. The Eagles cinched the 2A Black Region with a 42-3 victory over Round Valley on Friday.

EAGAR – It was No. 1 versus No. 2 with the region championship the line, and the Thatcher Eagles showed they are heads and shoulders above the competition.

Thatcher’s dominating 42-3 win over Round Valley on Friday night cliched the 2A Black Region and all but guarantees a perfect unbeaten regular season.

Turnovers assisted the Eagles (6-0 conference, 9-0 overall) as they turned an interception and fumble recovery into scoring opportunities for the offense.  Riley Morris scored twice in the first half – a 15-yard scamper and a 62-yard jaunt – and quarterback Jack Kortsen helped the cause with the interception on defense and  rushing touchdowns of 7- and 54-yards on offense to put the Eagles up 28-3 at the break. 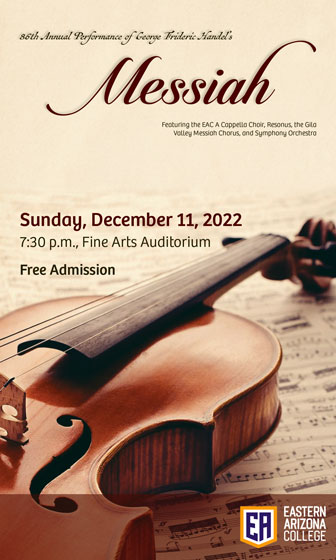 In the third quarter, a 64-yard punt return TD by Quinton Turley was wiped away by a block in the back. However, the big green machine would not be denied, and Brock Jones eventually punched it in from 1-yard out to put the Eagles up 35-3.

Morris, who finished with 155 yards on the ground, notched his third TD of the night when he punched in a fourth-quarter drive from 1-yard out, and the Eagles left the dome with a convincing 42-3 victory over arguably the second-best 2A team in the state.

Morris was interviewed by an iTalk reporter and said this game was a notch Thatcher has wanted to get after losing to the Elks in the regular season the last two years.

“This is probably our biggest rival in football this year- every year – so, I felt like we just had to get er’ done,” Morris said.

After the game, Kortsen told an iTalk 106.3 reporter that the team will continue to put the work in moving forward and praised his linemen and teammates.

”The brotherhood is so strong,” Kortsen said. “I’ve got a bunch of good linemen. We all love the game; we all show up, and we all have one goal.”

Thatcher will close its regular season at home Friday, Oct. 26, against the winless Santa Rita Eagles.

The Eagles will hope to take their unbeaten season through the playoffs for a third straight 2A State Championship.

The Safford Bulldogs got their sixth win in a row with a thrilling 35-34 victory over the Pusch Ridge Christian Academy Lions. Safford (6-2 conference, 6-3 overall) is unbeaten in the 3A South Region and will vie for the region title against Sabino (6-0 conference, 7-2 overall) at home Friday, Oct. 26, starting at 7 p.m.

Morenci will host St. Johns on Friday, Oct. 26, and Pima will host Round Valley the same day.

After dominating most of the year and winning its first six games, Fort Thomas lost it’s last three games, ending its season after a stunning triple overtime loss to Joseph City on Friday, 66-58.

Duncan also bowed out in the first round of the 1A State Playoffs despite a rousing comeback attempt. The Wildkats fell just short, 46-42, to Arete Preparatory Academy.