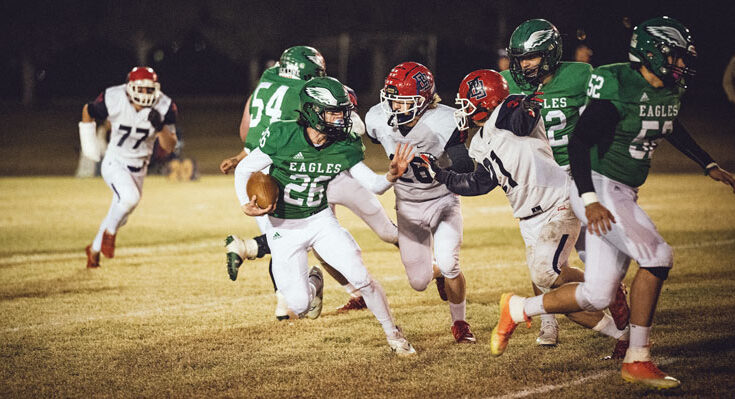 Photo By Steve Carter/Special to the Gila Herald: Ayden Bingham (26) and the Thatcher Eagles ran over the Benson Bobcats in the first round of the 3A State Playoffs on Friday night, 62-7. Bingham played only in the first half and had 204 yards rushing and four TDs.

“They’re either gonna score from the 50 or from the 10, so it doesn’t really matter,”

Benson assistant coach debating punting against Thatcher from mid-field in the second quarter.

THATCHER – After seeing Benson take on Thatcher in the first round of the state playoffs I can see why Safford fans are so upset. Either Thatcher has an embarrassment of riches on its team or the bar falls pretty far at the end of the playoff spectrum because Friday night’s contest made Benson’s team look JV. Having a 5’3”, 110-pound freshman start at QB doesn’t help. The Eagles steamrolled the Bobcats 62-7.

Thatcher scored touchdowns on each of its first nine possessions and would have had one on its 10th as well had it not chosen to just let the clock run out with the ball at Benson’s 8-yard line.

“You have to start prepping for that mentality of being merciless and that’s what we really wanted to start trying tonight,” said Thatcher head coach Dan Jones. “That’s kind of what we talked about all week is just no quarter asked for no quarter given. We just go and take. That was the hope this week.”

Still, one has to give acknowledgment to Benson and its quarterback, as they kept on getting back up and coming back for more after being bludgeoned by the likes of Jacob Rasumussen and Jackson Conrad all day.

And while positive offensive plays were few and far between, Benson QB Brax Cluff managed to hit Aiden Finch on the sideline late in the first quarter, and after the defender went for the ball and missed Finch had nothing but green grass in front of him. The play went for 75 yards – more than the Bobcats would amass collectively for the rest of the game – and gave Benson something to cheer about as well as avoid being completely shut out.

With the blowout, a number of Thatcher players only played one half, but it was enough to fill up the stat lines – especially for running back Ayden Bingham who had 124 yards and two TDs . . . in the first quarter. Bingham also added another 80 yards and two more TDs in the second quarter to finish with 204 rushing yards, four TDs and one 2-point conversion on 10 carries to average an astonishing 20 yards per carry.

Thatcher QB Brandon Napier also had a big night on the ground and in the air and ran for an 8-yard TD in the first quarter and threw a 6-yard TD to Cody Jones with 8 seconds left in the second quarter to put Thatcher up 48-7 at the half.

The Eagles rested a number of key starters in the second half, but still controlled both sides of the ball. Scotty “The Refrigerator” Ambler easily scored on a 3-yard dive early in the third and Hunter Saline finished the evening’s scoring with a 4-yard run late in the third for the 62-7 victory.

“It’s good for them (reserves) to get a taste of this and feel what it’s like and, hopefully, that propels the program forward in the future,” coach Jones said.

Thatcher will next host No. 8 Valley Christian, which defeated No. 9 Mohave 33-19 in the first round. The game at John Mickelson Field at Eastern Arizona College on Friday, Nov. 11, starting at 7 p.m.

If Thatcher defeats Valley Christian, it could face a tough No. 4 Show Low team in the semifinals.

“Our goal is to be there standing at the end, so come what may,” coach Jones said.

The Camp Verde Cowboys (4-1 region, 9-1 overall) finished second in the 2A Agua Fria Region behind Heritage Academy Laveen. Camp Verde defeated No. 9 San Tan Charter 42-30 in the first round.

Morenci will now host No. 7 Tonopah Valley for a quarterfinal on Friday, Nov. 11, starting at 7 p.m.

Tonopah Valley (5-0 region, 9-1 overall) is the 2A Hassayampa Region Champion. The Phoenix defeated Heritage Academy Laveen 75-14 in the first round to advance. 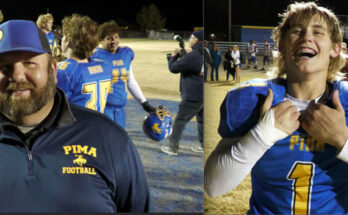