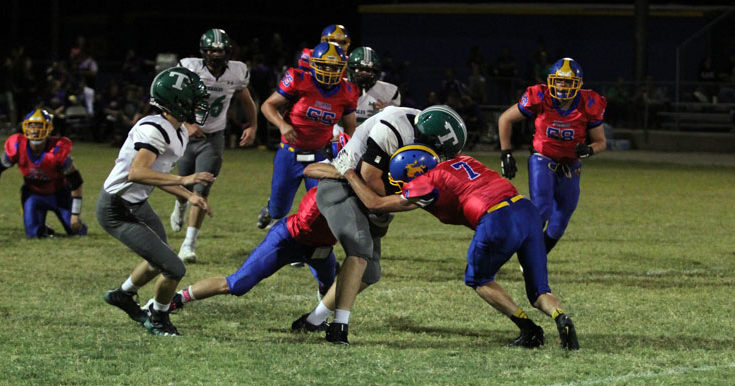 PIMA – Trailing 14-7 late in the second quarter, Pima head coach John Bryant chose to go for it on 4th-and-long from the Roughriders’ own 30-yard line. Quarterback Teddy Rector was sacked on the play and Thatcher (1-0 region, 2-1 conference, 4-2 overall) took advantage of the turnover to score just before halftime and retake the momentum. The Eagles didn’t look back and left Edd Hubbard Field with a 42-7 victory.

Perhaps the failed 4th down conversion wasn’t as pivotal a play as it appeared, but Pima (0-1 region, 3-3 conference, 3-3 overall) had just scored in exciting fashion and had forced Thatcher to punt. With points at a premium, one could see why Bryant would have chosen to go for it. But if I’m being honest, in the heat of the moment I thought it was a bad idea.

But that’s how things went for the most part for the Roughriders on Friday night in a game in which they put the ball on the ground roughly seven times, losing two fumbles and setting up Thatcher for easy points.

It started on the third play from scrimmage when Pima quarterback Teddy Rector mishandled a high snap. With it being 3rd-down-and-15 at the time, Thatcher defensive end Collin Thompson was on a bull rush to the quarterback and as Rector lost it the ball took a one-hopper bounce right into the arms of Thompson, who cradled it like a baby and waltzed 5 yards into the end zone for the game’s first score.

Thatcher did what Thatcher does, and on its first offensive series, the Eagles marched down the field, handing the ball off to junior running back Michael McBride time after time as he was picking up 5, 6, or even 8 yards at a clip. McBride was inserted into the starting spot due to injuries to Bretton Dodge (knee) and Gavin Bryce (shoulder).

Morales said Dodge is scheduled to have an MRI on his knee but as of now there is no set timetable for his return and he will definitely be out for the team’s makeup game this Friday against Morenci.

In their stead, McBride performed well and was utilized frequently by the Eagles. He also scored twice in the second quarter; on a 3-yard dive after he set them up with 1st-and-goal to go up 14-0, and again on an 8-yard run with about a minute to go in the half to put Thatcher up 21-7 heading into the break.

“Our line is awesome,” McBride said. “The blocked perfectly to make a hole for me to be able to run. I just thank the line for their wonderful job.”

For Pima, moving the ball on the ground was troublesome, but the Roughriders had a couple of good drives with assistance from the air.

On the Roughriders third possession, Rector hit Kaleb Blair on a deep, 30-yard pass to set them up with 1st-and-goal at the 10.

Facing a 4th-and-goal from the 8, Rector hit Wyatt Schmidt for the TD, who held onto the ball even though the defender was on him like saran wrap on yesterday’s leftovers and was flagged on the play for interference.

However, the highlights were too far between and, unfortunately for Pima, the lowlights were more frequent.

And Thatcher took advantage every single time. When Pima went backward and had to punt from its end zone on 4th-and-forever, Wren hit his tight end Spencer Stevens on a slant and the big man took it 42 yards to paydirt.

“I told the line (that) they haven’t played a line like we have and I think we need to win the line of scrimmage on both offense and defense,” Morales said.

The following series, Pima coughed up the ball in its own territory and on the very next play Wren hit Kyle O’Donnal for a 33-yard score. Now, I know O’Donnal isn’t the largest guy out there, but Pima had a major coverage issue as nobody was within 10 yards of O’Donnal before Wren tossed it to him.

“Throwing the ball is something that we’ve been working on,” Morales said. And I think Mark is getting a little more comfortable. He had a little more time to throw today, and I think that made a difference.”

The final score came on a scramble by Wren after he was pressured by three Roughriders. Wren split two defenders and zipped down the left sideline until he ran over the last line of defense at the goal line for a 30-yard TD to make it 42-7.

“I just rolled out,” Wren said. “I (saw) two guys coming, and honestly, I don’t know how I did it. I just slid right between them and I just saw green grass.”

Wren also gave props to his lineman for keeping the Pima rushers off him and opening running lanes. Unofficially, the Gila Herald had Wren throwing the ball 6-9 for more than 100 yards and it appeared that he threw it more tonight than he has all year.

“It was fun to get to throw for a change,” he said. “I threw a lot too. That was fun and it was fun completing them.”

Thatcher will travel up to Morenci (0-0 region, 3-2 conference, 3-2 overall) on Friday, Oct. 11 to make up for the season opener that was canceled Aug. 23 due to lightning. Morenci also travels to Bayard Cobre New Mexico today (Saturday) for a 12 p.m. matchup.

The Safford Bulldogs (1-0 region, 4-1 conference, 4-2 overall) continued their winning ways Friday night with a region-opening shellacking of the Sahuarita Mustangs (0-1 region, 2-2 conference, 3-3 overall), 31-0. Safford has won its last three games by a combined score of 116-8.

The Bulldogs currently sit atop the 3A South and are ranked 12th in the state in the 3A Division, but will finish its season with two tough games against Pusch Ridge and Sabino.

First, Safford will next travel to Tucson to battle Catalina (0-1 region, 0-3 conference, 0-6 overall), where it is likely the Bulldogs’ trend of leaving their opponents scoreless could continue. The Catalina Trojans have been held without a point in five of their six games and have only scored a solitary touchdown (6 points) the entire season. 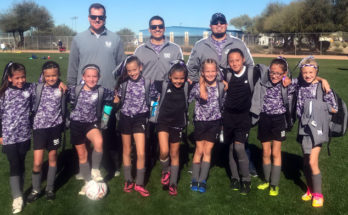 Local soccer all-stars have a top finish at Tucson tournament 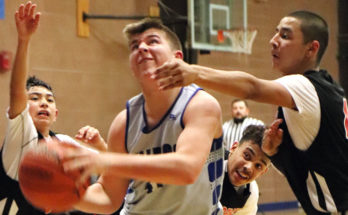 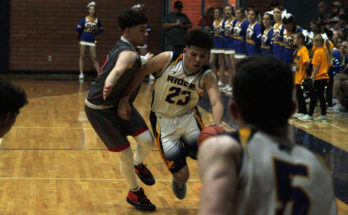 Roughriders come back to buck Pumas