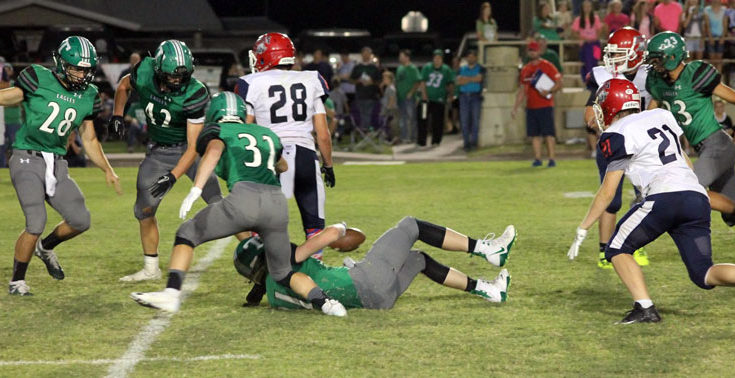 Photo By Scott Bennett: Thatcher lost the handle early but special teams and defense helped propel them ahead anyway. The Eagles finished the first half of the season undefeated at 5-0, after destroying the Benson Bobcats 48-6 on Friday.

THATCHER – It’s not usual for a team to fumble the ball away on its first offensive play, be flagged on its second and fumble on its third while ultimately turning the ball over for a second straight offensive series on an interception and still somehow be up 14-0; but the Thatcher Eagles are not a usual team.

The reigning back-to-back 2A State Champions are now halfway through their three-peat season and are a perfect 5-0 after dismissing the Benson Bobcats (2-2), 48-6. In their two games against 2A Black opponents this year, Benson has only scored 12 points while Morenci and Thatcher put up a combined 69.

After the game, Thatcher head coach Ramon Morales was pleased with most of his team’s performance but advised there is more to improve if they want to repeat again.

“We need to clean some things up,” Morales said. “If we can keep getting better, I think we’ll be a force to be reckoned with, but we understand that if we don’t get better that we can also get beat.”

The toughest opponents for Thatcher this year so far has been other local products, as they beat Morenci in the opener, 15-0, and took the rivalry game against Safford, 28-20, after being down for three quarters in that game.

On Friday, it didn’t take long for the Eagles to get on the scoreboard. After holding the Bobcats to a three-and-out, Bretton Dodge returned a punt 85 yards to the house to give the special teams a score.

On Benson’s very next offensive series, Cole Motes ripped the ball away from Benson running back Shane Dezonia and it fell into the waiting arms of lineman Quentin Mack. After taking a few steps, Benson quarterback Jayse Burkett grabbed onto Mack’s legs and Ty Moncada hit him high. Just as he was being tackled to the ground, Mack saw Trace Goodman to his left and handed off the ball to him. Goodman then skirted the sideline for 32 yards to pay dirt and the Eagles had a defensive score as well. Thatcher found themselves up 14-0 and its offense had yet to touch the ball.

“In practice, sometimes, we’ll mess around doing that stuff,” Mack said. “Cole Motes ripped it out and it was just mine for the taking. Their quarterback, I think, got my legs, so I saw our corner and I just handed it to him. I don’t know, it was just all in the moment.”

The rest of the first quarter wasn’t as kind to the Eagles’ offense as they turned it over on a fumble on a mishandled handoff to Riley Morris and an interception by Burkett deep in Bobcats territory on a fourth-and-3 play by Thatcher.

The offense didn’t work for Benson all game long, however, and they turned the ball over on a fumble and downs in the first quarter and punted twice.

After an initial punt in the second quarter, Thatcher’s defense began setting up its offense for success by giving it short fields to work with.

A gutsy punt fake by Benson on fourth-and-5 from its own 21-yard line initially worked but was negated by a substitution penalty.

The Eagles then drove the ball for the best time all night with a nice pass play from Jack Kortsen to Spencer Stevens for a 17-yard pickup. Two plays later, Trevan Clark broke the ice for the offense when he went untouched around the left side for a 20-yard TD, and Thatcher was up 21-0.

It just would not be the Bobcats’ night offensively as another big play – this one a 45-yard pass play from Burkett to Dondre Villalobos – was negated by a penalty; this time it was holding.

Thatcher ended up forcing a punt attempt, which was disrupted by pressure from Ben Shumway. The Benson kicker couldn’t get it off, and Riley Morris swallowed him up for the turnover on downs.

Three plays later, Kortsen danced his way into the end zone on a 9-yard run, and Thatcher was up, 27-0 with time running out in the first half. But they weren’t quite finished.

The Eagles used their timeouts while Benson was on offense to save some time left in case the defense made another stop. True to form, the Bobcats were forced to punt, and this time the attempt was blocked by Shumway, with Seth Lunt taking it down to the 12-yard line with 33.5 seconds left. The Eagles would only need 21.5.

Two runs by Morris and Thatcher went into halftime up 34-0. Morales chalked up some of the ground success to its rotation of running backs.

Thatcher’s opening drive of the second half was a classic green machine offense as it methodically moved the ball downfield. The Eagles faced a fourth-and 6 from the 16, however, but they capitalized when Kortsen found Cole Motes in the back of the end zone for the score to go up 41-0.

Then it was Thatcher’s turn to have a big play nullified by a penalty as a 50-yard TD pass play to Goodman was called back for holding. The Eagles then were penalized twice for false starts and another hold and ended up punting the ball away.

Benson avoided the shutout by getting on the board in the fourth quarter after being set up by a 42-yard run by Carson Barney to the 12-yard line. Barney capped the drive with a 4-yard score but the extra point was blocked by Mack.

Thatcher finished the night with a 43-yard screen pass to Bretton Dodge to the 5-yard line, followed by a 5-yard plunge by Dodge into the end zone as Thatcher stayed unbeaten with the 48-6 victory.

Thatcher will next host the Santa Cruz Valley Dust Devils (1-3) in a rematch of last year’s one-point championship game and the one-point semifinal game from two years ago.

The Dust Devils don’t appear to be the same team this year, however, as they have losses to Sahuarita (28-22), Round Valley (20-19), and, Friday night to Morenci (42-12) in what might be more telling for Morenci’s team than Santa Cruz Valley.

However, Morales said his team will not overlook the Dust Devils.

“We don’t overlook anybody,” Morales said. “Whoever is next on our schedule, we just try to put our best game out there.”

Morenci (4-1) had a big victory on the road against Santa Cruz Valley (1-3). After a close first half, the Wildcats pulled away in the second half to blow out the Dust Devils, 42-12. Morenci will next travel to Bisbee on Friday, Sept. 21, to play the Pumas, who were pummeled by Pima.

Safford (1-3) notched its first win of the season with the victory against Show Low (1-4). Like Morenci, Safford pulled away in the second half to win big, 54-28.

Duncan had a bye and will next travel to St. David on Friday, Sept. 21, starting at 7 p.m.