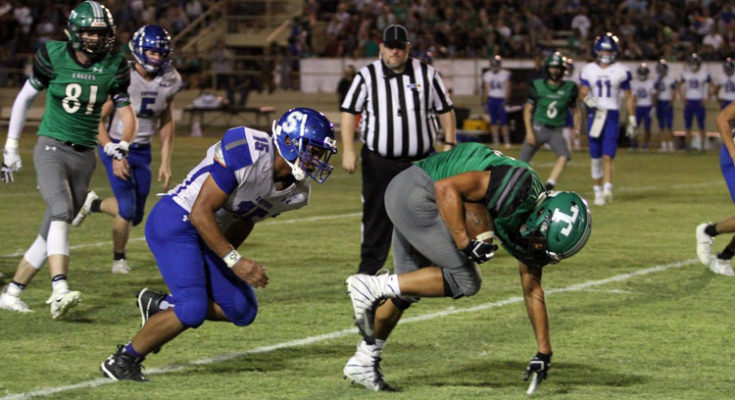 Photo By Stan Bonifacio: Thatcher’s Bretton Dodge keeps his balance just before being tackled during the annual rivalry game with Safford. The game will take on even more meaning if Thatcher stays in the 3A Conference and possibly in the same 3A South Region as Safford.

PHOENIX – With the new system of classification by the Arizona Interscholastic Association, it is no wonder that three of the top 2A teams this year were moved up to the 3A Conference.

Thatcher, which won three state titles in a row and then made it to the semifinals this year, was moved up into the 3A Conference for football upon initial placement by the AIA. This year’s 2A Champion, Round Valley, and runner-up, Phoenix Christian, were also moved into the 3A Conference.

However, they will not have to deal with the likes of former 3A powerhouses American Leadership Academy-Queen Creek, Benjamin Franklin, or Northwest Christian, which were all moved up to 4A. Schools can still appeal their initial placement.

While the classification for football is based on a rating that reflects which each team has accomplished the past three seasons, Thatcher was also moved up to 3A for volleyball, boy’s and girl’s basketball, baseball, and softball due to its increased enrollment. For those sports, Thatcher will be in the 3A South Central Region.

Since the AIA is keeping the same regions for football that it had this year, it seemingly only makes sense Thatcher joins Safford in the 3A South Region. However, the AIA also discussed assigning teams to three tiers within each conference with the teams with the best ratings the past three seasons playing only the top two out of three-tier teams in their conference, but the conferences will decide whether to follow that model or not.

For other local football teams, Safford stayed in 3A, while Morenci and Pima stayed in 2A, and Fort Thomas and Duncan stayed in 1A.