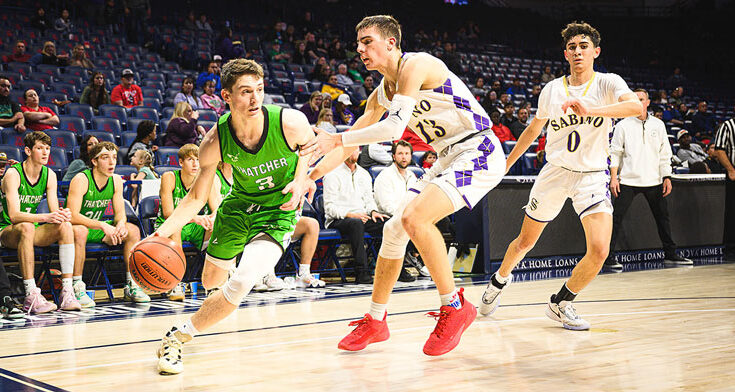 Steve Carter Photo/Special to the Gila Herald: Landon Duncan (3) drives on Sabino’s Korbin Jessup. Thatcher completed a regular-season sweep of Sabino with an 80-70 win during the MLK Jr. Basketball Classic at UA on Monday.

The game was played at UA’s home court

TUCSON – The Thatcher Eagles (4-0 3A South, 10-6 overall) won their fifth game in a row and second consecutive against the Sabino Sabercats (1-1 3A South, 8-10 overall) in Tucson on Monday during the 19th annual Martin Luther King, Jr. Basketball Classic. The Eagles pulled out the 80-70 victory on the hallowed court of McKale Memorial Center at the University of Arizona where the Wildcats play.

“Being a part of the MLK Classic at McKale Center was a fun experience for us,” said Thatcher head coach Kyle Hull. “The atmosphere was cool and kids played up to it. Savino is a tough opponent and played well. Weston Haebig shot the lights out and we were just trying to contain him.”

The win kept Thatcher perfect in region play and sets up a big match against the Tanque Verde Hawks (2-0 3A South, 10-4) who are second in the region. Tanque Verde most recently lost a tough one to Safford, 50-52, on Jan. 13, and will face Thatcher on Wednesday. The Safford game was listed by the Arizona Interscholastic Association (AIA) as a “Freedom” game and not a region game even though Safford’s earlier loss to Tanque Verde on Jan. 3, 36-43, was listed as a region game.

The Eagles had a big offensive third period (29 points) compared to the Sabercats (16 points), and Thatcher led big after three, 57-42. The Eagles hit from deep all over in the third with multiple treys by Bryce Larson, Brandon Napier, and Christian Carter.

Carter went off on a career night on the big stage and finished with a team-high 23 points. Brandon Napier and Bradley Claridge also contributed heavily with 19 and 18 points, respectively, and Bryce Larson finished in double digits with 13 as well.

“Our guys played some great defense in the third quarter to make our run,” Hull said. “After that, we just tried to slow #23 down and control the ball without turning it over. Make every possession count and we were able to do that and come out with a big region win. (I’m) happy with how we played and hope to continue the momentum!”

Weston Haebig scored a game-high 38 points while trying to will the Sabercats back. Sabino won the period, 28-23, but Thatcher won the game. 80-70.

Other games this week:

Pima (6-0 2A East, 14-3 overall) had a game canceled and will have had eight days between games by the time the Roughriders travel to Tombstone on Friday, Jan. 20, for a region game, starting at 7 p.m. The Roughriders last defeated Morenci, 68-40, on Jan. 12.