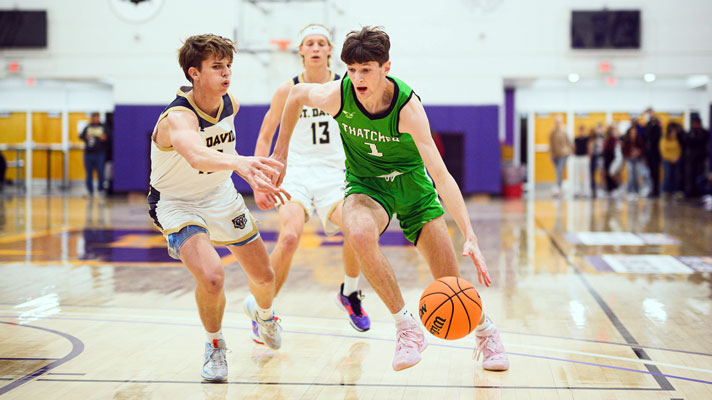 Steve Carter Photo/Special to the Gila Herald: Bradley Curtis and the Thatcher Eagles will battle the Pima Roughriders for the 59th annual EA Boys Holiday Basketball Tournament Championship on Thursday at 8 p.m.

Final round of 59th E.A. Holiday Tourney begins at 1 p.m

By Raymundo Frasquillo and Jon Johnson

THATCHER – The No. 1 seed Pima Roughriders (8-2) will face the No. 3 seed Thatcher Eagles (6-5) for the championship of the 59th annual EA Boys Holiday Basketball Tournament at EAC’s Guitteau Gymnasium at 8 p.m. on Thursday, Dec. 29. It will be the 11th meeting of the two teams in the tourney finale, each having five previous wins over one another.

The same two teams met for the championship last year, with Thatcher prevailing 45-38.

No. 1 Pima reached the final by defeating No. 8 Duncan 75-33 in the opening round and No. 4 Safford 61-33 in the second round. The championship game will be held Thursday, Dec. 29, starting at 8 p.m. in Guitteau Gymnasium.

For more photos of the action from round 2 visit our Facebook page.

The Bulldogs hung around for a quarter but the combination of a clamp-down defense, Seth Russell pounding it down low and Garrett Curtis displaying the lost art of the mid-range jumper pushed Pima into a big first-half lead Safford could not recover from.

Curtis was masterful in the mid-range, to a fault at one point when he pulled up when he probably should have continued on for a layup. But it is something to behold, and when Pima was in need it was Curtis who stepped up, scoring two and-one plays in a row in the first period to give Pima a 14-10 first-period lead. Curtis then went for 8 of his game-high 20 points in the fourth period to seal the victory.

In the second and third periods, it was Russell carrying the load for Pima as he battled down low in the trenches and hit all 13 of his points in those two periods.

Garrett Curtis broke an early 4-4 tie with 3:24 elapsed, Safford’s Jeramiah Garcia countered with a 3-pointer (6-7) 1:43 later, and a Curtis field goal plus free throw gave the Roughriders the lead for good (9-7) with 2:42 left in the opening quarter. Curtis accounted for eight points in the first eight minutes of play.

A number of Pima players saw actions and scored, including Keegan Corona with 7, Pierce Ashby with 6, Grant Ashby with 5, Clark Ashby with 3, Coy Miller, Leland Thompson, and Nathan Skiba with 2 each, and Riley Alder with 1 point.

For Safford, the long ball kept them close in the first period, but single-point outputs of just 6 points in both the second and third periods set their fate.

Nathaniel Quintero continued his bid to be on the All-Tournament team with a solid 12-point performance that showed off some nifty moves. Brayden Bowman battled among the trees all night and came away with 8 points of his own to show for it. Other Safford scorers included Jeramiah Garcia with 5, and Cole Yentsch and C. Goodman had 4 points each.

The Thatcher Eagles handed the St. David Tigers their first loss of the season and did so in convincing fashion.

Thatcher scored twice within the first two minutes (4-0), Saint David made its initial field goal with 2:15 elapsed (2-4), came within two twice more during the next four minutes, at 4-6 with 4:17 elapsed, and at 6-8 with 5:42 elapsed, but never tied or led the entire game.

The Tigers were unable to score in double-digits during either of the first two quarters. Thatcher led 14-8 following the first quarter, 29-12 at halftime, and 43-29 heading into the fourth quarter.

The game served as a coming-out party for Thatcher guard Brandon Napier, who appears to be making that adjustment from football to basketball now. Napier was deadly from beyond the arc with three 3-pointers and also attacked the rim – getting to the line and scoring 3-3 free throws on his way to a game-high 19 points.

“He’s practiced one day for us and then he got some game time,” said Thatcher head coach Kyle Hull. “That’s what we were hoping to get – some legs under him. We got him a little more tonight. We’ll see how he feels.”

Despite being double-teamed down low, Bradley Curtis still had 18 “quiet” points on a night when he seemed to get his without much noise.

Cody Jones also had a big night pressing the basket and had 11 points. Other scorers for Thatcher included Christian Carter with 11 points, Landon Duncan, and Bryce Larson with 2 points each, and Daniel Jones with 1 point.

The Eagles’ defense held the high-scoring Tigers to just 8 points in the first period and 6 points in the second to more than double up St. David at the half, 30-14.

“Defense, that’s what we talked about,” said Hull. “Defense was our game plan and I just thought they did a good job playing defense which turned into offense.”

St. David came out fighting in the third and won the period 15-13 behind buckets from Koy Richardson (13 points) and deep balls from Wyatt Judd (10 points) and Paul Parker. St. David’s other Richardson, Koy, was held to 6 points on the night, and Matteo Carrafa had 4 for the Tigers.

“They (Richardsons) like to shoot and we knew they could get to the rim but we just preached defense and we put our better defenders on them and they did their job,” Hull said. “They did what we asked them to do.”

The Eagles will now defend their tournament championship against the Pima Roughriders on Thursday, Dec. 29 at Guitteau Gymnasium at EAC, starting at 8 p.m.

Michael Stanley drilled a 3-pointer 21 seconds into the game to give Fort Thomas the initial lead, but Saint Johns turned in a 15-7 effort to lead 15-10 at the end of the first quarter.

A pair of Geron Talgo field goals, one from both outside and inside the arc, tied the score with 38 seconds elapsed in the second quarter. The Apaches added seven more field goals, four inside and three outside versus three field goals plus 2-2 free throws by the Redskins, giving Fort Thomas a 22-6 second quarter and 32-21 halftime advantage.

Fort Thomas led by 14 (56-32) after three quarters, but Jordan Winters’ second dunk of the afternoon got Saint Johns within five, 55-60 with 2:03 left to play, but no closer. The Apaches had an 8-7 edge in the remaining time to win by seven.

A Daylen Johnson 3-pointer with 35 seconds elapsed put Morenci ahead to stay. Benjamin Harris got Duncan within one 21 seconds later, a Tristen Sanchez 3-pointer tripled (6-2) the difference with 2:04 elapsed, and a Brody Waters 3-pointer 1:24 later again narrowed the difference to one (6-5). Duncan neither tied nor took the lead during the entire game.

A pair of Derick Lytle free throws 1:14 into the fourth quarter put the difference in double figures for good.