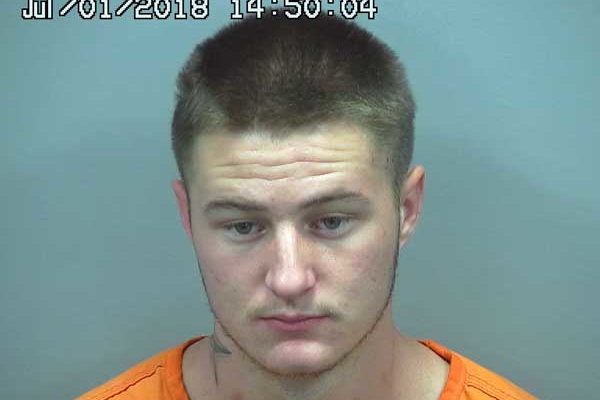 Contributed Photo/Courtesy GCSO: Nathan Schaffner and a 17-year-old juvenile on probation from the Arizona Juvenile Department of Corrections were caught inside a residence after a homeowner informed police that he saw the break-in on his home surveillance feed.

Nathan Schaffner, 18, was arrested and booked into the Graham County Detention Facility for trespassing in the first degree. A 17-year-old juvenile was also taken into custody for trespassing in the first degree, but since the Eastern Arizona Regional Juvenile Detention Facility closed the previous day, the juvenile was transported to his mother’s residence in Thatcher and was released.

Deputies were dispatched at about 10:32 a.m. to the residence after the homeowner informed them that he saw someone take down one of his home security cameras and break into his house. The homeowner was in Globe at the time of the break-in, but was able to access his security footage in real time and informed County Dispatch that the male was still inside.

Upon arrival, a deputy noticed a screen to a window had been removed. He then attempted to open the front door and, after seeing it was unlocked, entered the residence and encountered the juvenile lying on a couch.

One deputy took the juvenile into custody and another deputy continued a sweep of the house. He then located Schaffner hiding in a closet.

The juvenile was found to be on parole from Adobe Mountain School in Phoenix, which is part of the Arizona Department of Juvenile Corrections. The school provides youth services for juveniles who have committed crimes, and students receive rehabilitative programming and behavior management.

Schaffner said he was just hanging out at the house and that he used to live there. He allegedly admitted to taking the surveillance camera down and placing it into a box but said he entered the residence through an unlocked door and not through the window.

The homeowner was informed of the situation and said Schaffner did live there briefly for a month but didn’t pay any rent and was forced to leave. He said Schaffner hadn’t been at the residence for at least a week and he didn’t have permission to be there.

Schaffner was then taken to jail and the juvenile to the residence in Thatcher.