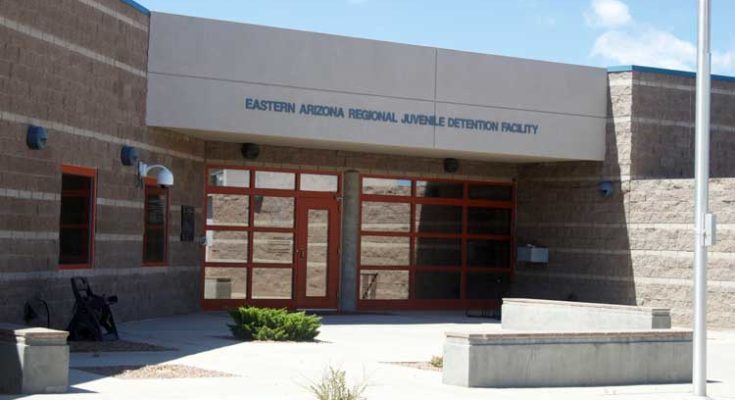 Jon Johnson Photo/Gila Herald: Come July 1, the Eastern Arizona Juvenile Detention Facility will no longer detain juveniles, who will instead be shipped to Pinal County.

SAFFORD – Come July 1, juveniles who run afoul of the law in Graham and Greenlee counties and require detention will be transported to a facility in Pinal County.

The Eastern Arizona Regional Juvenile Detention Facility (EARJDF) will officially close June 30 after 18 years of service. The facility formerly held juveniles from both Greenlee and Graham counties, as well as federal juvenile detainees through the Bureau of Prisons and U.S. Marshals, which has jurisdiction over Native American reservations.

Budget concerns, due to the previous loss of the federal contracts, lesser numbers of juvenile detainees and the inability to attract other counties to house their juveniles here due to being underbid by Pinal County is what led to the closure, according to Graham County Board of Supervisors (BOS) Chairman Danny Smith. Instead, the BOS has taken the stance if you can’t beat them, join them, and will instead send Graham County’s juvenile offenders requiring detainment to Pinal County as well.

“We just came to the same point that every other county has,” Smith said. “Despite the transportation costs, it will save us money. We can’t afford it (EARJDF) . . . There’s just so few juveniles.”

The cost to hold juveniles at Pinal County is $175 per day, not counting transportation costs, according to EARJDF Administrator Charles Gatwood. Pinal County has an enormous facility and underbid Graham County for juvenile detention. Multiple other counties signed on to have their juvenile detainees held in Pinal County, and Graham and Greenlee counties will file suit out of necessity.

The EARJDF opened in April 2000, and Gatwood has been the administrator since 2002. The cost to house juvenile detainees in Pinal County makes fiscal sense since the cost to run the EARJDF is roughly $850,000 annually.

“It’s considerable savings to the county,” Smith said. “We were hoping that something would change and we would find a better solution the last couple of years, but the whole climate of juvenile corrections changed and it was not something we could control.”

The building is a 48-bed facility with multiple classrooms for schooling, a nurse’s station, observation center, and more. There are four pods that hold 12 single cells each, along with a common area and recreation yard. The facility holds both male and female detainees and was originally designed to be large enough to hold federal detainees.

“They built this place with extra space to be able to rent beds to the federal Bureau of Prisons,” Gatwood said. “That went gangbusters for a good amount of time from 2003 to 2016 . . . The board decided to build a facility so that they could house these federal juveniles and help offset the cost to the county taxpayers, so it would cost them less to house our juveniles and Greenlee County juveniles.”

During that time, the EARJDF was accredited by the American Corrections Association. However, during President Barack Obama’s administration, the trend became to catch and release federal juvenile detainees back into their country of origin instead of detaining them, thus resulting in smaller numbers being housed at the Graham County facility. Additionally, according to Smith, after then Arizona Governor Jan Brewer had her confrontation with Obama on the airport tarmac, the federal adult, and juvenile detainees were removed from Arizona and sent to Texas instead.

The facility has seen numerous juvenile detainees through the years and has graduated a number of them with General Education Diplomas through its Pinaleño Grasshoppers school, including one last week. Lower numbers of juveniles led to the loss of the designated teacher, but the facility still used online A+ education used in alternative schools to further detainees’ education.

The adult facility is looking at whether it can repurpose the educational materials for its population.

“It is unfortunate that we’ve got a very nice facility for juveniles in this community to be served and that probably won’t happen down the road,” Gatwood said.

What happens to the employees?

There are 11 employees of the EARJDF, including Gatwood, with many having numerous years of detention experience.

Gatwood said it appears that one of the employees could be kept on board to handle transportation to and from Pinal County, with the rest hopefully transferring to the Graham County Adult Detention Facility. Gatwood himself said he hasn’t decided whether to retire himself or find another position somewhere else.

What’s next for the building?

While the facility will not be used to detain juveniles it is still a viable building. So far, the plan is to have the Graham County Juvenile Probation Department move from the current location it shares with adult probation at the old Stockman’s Bank location on Main Street over to the EARJDF building, according to Chief Probation Officer Josh Halversen.

“There are changes coming,” Halversen said.

It is still unknown whether the facility will still be able to provide 23-hour holds to juveniles who are referred by juvenile probation to just being held overnight. While that is still being debated with various possibilities being discussed, Halversen made one thing clear.