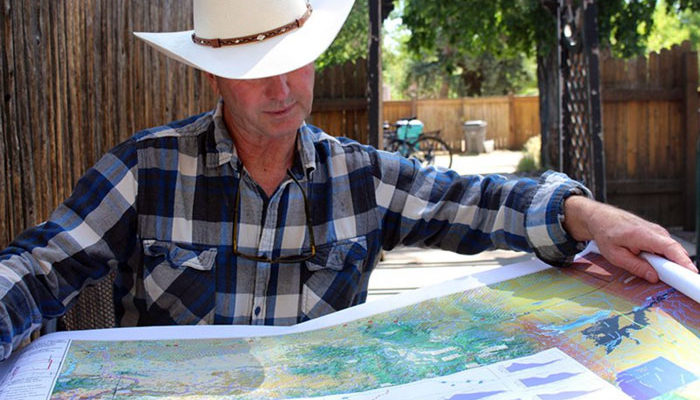 Photo By Luke Runyon/KUNC: Developer Aaron Million wants to divert 55,000 acre-feet of water from the Green River in Utah to Colorado’s Front Range.

FORT COLLINS, COLO. – The Colorado River, which supplies water to croplands and 40 million people in the Southwest, is projected to hit a historic low mark within two years, forcing mandatory cuts to deliveries in Arizona, Nevada, and Mexico.

Facing exceptional drought conditions this summer, cities throughout the river’s vast watershed imposed mandatory water restrictions, ranchers have begun selling cattle they can’t feed, and the river’s reservoirs are headed toward levels not seen since they were created in the early and mid-20th century.

Many of those who closely watch the Colorado River say it is tapped out, citing a range of symptoms: the impending shortage declaration; the river’s inability to reach the Sea of Cortez; and the plant and animal species whose populations tanked as the dams went up and reservoirs filled behind them. To these observers, it’s an overallocated system, and any proposal to pull more water from it should be intensely scrutinized or halted altogether.

But not everyone agrees with that assessment. Some developers contend there still are places in the 246,000-square-mile Colorado River Basin to dam and divert water. Although some portions of the watershed are bracing for impending shortages, they say, other portions have surpluses, and it would be irresponsible not to put that extra water to use.

Two parties, looking at the same set of facts in the same river system, come to polar conclusions about its future. Can the Colorado River watershed have too much water and not enough at the same time?

The answer is tied up in multistate agreements governing water that exists on paper but often not in the real world.

Aaron Million of Fort Collins, Colorado, styles himself as a maverick. He arrives at our interview wearing a cowboy hat, denim, and plaid, pulled together by a shiny belt buckle. During our conversation, he quotes both Chuck Norris and the 1995 Mel Gibson movie “Braveheart.” More than twice he referenced a six-shooter.

Million’s name is synonymous with a water pipeline he has been pushing for almost a decade. On a coffee shop table, he unrolls a map and points out the features of his latest proposal. His finger traces the route of his “renewable energy project.” It would start in Utah on the Green River, then snake across Wyoming before dropping down into Colorado’s populated Front Range, generating electricity as the water moves from one side of the Continental Divide to the other. Million, whose company is called Water Horse Resources LLC, says it would cost about $1 billion to build, paid for by private investors.

“It’s a bigger project, but they get done every day,” he said. “I mean, we built the Transcontinental Railroad, last I remember.”

The Federal Energy Regulatory Commission in 2012 quashed Million’s plan to construct a 500-mile pipeline from Wyoming’s Flaming Gorge Reservoir to Colorado’s Front Range. FERC regulators at the time said the proposal was incomplete.

“Keep in mind, we’ve been in the saddle for a while,” Million says. “And you know we got knocked off pretty hard. I know people thought I was dragged to death, but I’m pretty tough, raised in the Utah desert.”

Both projects, old and new, take advantage of a historical fluke. The 1922 Colorado River Compact – which divvies up its water – was written when flows were at a record high. But for at least the past 18 years, high temperatures, drought, and overuse have sapped the river’s flow.

Million says that’s more of a problem for Arizona, California, and Nevada.

“People say there’s no water left in the system,” he said. “Well, when California has drained, and Nevada and Arizona have drained the river and then cry foul because Lake Powell and Mead are low, again I’ll reiterate: Had they not their drained and overtaken their share, they’d be full by four or five times. Those are the facts. You can run the numbers.”

Million says the river’s Upper Basin, which covers Wyoming, Colorado, Utah, and New Mexico, haven’t fully developed their share, while those in the Lower Basin have taken more than what they’re entitled to. His pipeline is just one more plan among many to fully develop the river’s water, he says.

‘The straw that breaks the camel’s back’

Nick Schou, conservation director with the Utah Rivers Council in Salt Lake City, says the notion of a water surplus in the Colorado River Basin is laughable.
“This river is already reeling. It’s nearly close to death from a thousand cuts,” Schou said.

The environmental group is one of many filing protests against Million’s proposal. It also is fighting a proposed pipeline in southern Utah that would pump water from Lake Powell to rapidly growing St. George, Utah.

“These big, new diversions could be the straw that breaks the camel’s back,” Schou warned.

The idea that further diversions of the river and its tributaries won’t negatively affect the entire basin is wrong, he said.

“There’s this disconnect between what water rights states are entitled to on paper via the Colorado River Compact and what water is actually in the system,” he said.

He’s referring to the concept of “paper water.” In the 1922 Colorado River Compact, the 1948 Upper Colorado River Basin Compact and other major water agreements, there’s a certain amount of water that signees agree exists on paper.

But that amount doesn’t always match up with so-called “wet water,” or what exists in reality. Some states have met the limit of their paper water from the Colorado River; others have not.

Schou said water managers should think of the watershed as a connected system rather than a disconnected series of tributaries and manage it accordingly. Without that mental and legal shift, Schou said, everyone can claim to be following the rules while sucking the river dry in the process.

Anne Castle, a former assistant secretary for water and science with the Department of the Interior who’s now at the University of Colorado law school in Boulder, notes that water rights “are never simple. The Colorado River Basin is not simple.”

“The Colorado River system is at risk of crashing Lake Mead or crashing Lake Powell,” Castle said. “Meaning that the all the water gets used and the elevations drop so low that you can’t force water through the system anymore.”

Castle – whose work receives funding from the Walton Family Foundation, which also provides funding for KUNC’s Colorado River coverage – says Million’s pipeline would raise the likelihood of those vital reservoirs dipping even further.

But Million isn’t the only person suggesting that more water is taken from the Colorado River and its tributaries. Two water agencies on Colorado’s Front Range – Denver Water and the Northern Colorado Water Conservancy District – are finalizing projects that would do just that. So, too, would the proposed Lake Powell pipeline in southern Utah.

But Castle makes a distinction between those projects, which were included in the Colorado Water Plan and already are accounted for in the state’s share of Colorado River water, and Million’s pipeline. Additional diversions could place Colorado above what the state is allowed to take, she said.

“Some of the projects that have been proposed for trans-mountain diversions within Colorado … were understood to be part of the baseline that we’re dealing with,” Castle said. “So we have to provide for the additional risk to the Colorado River Basin over and above those projects.”

One thing is certain, Castle says, when it comes to river politics, everyone’s fates are intertwined.

That argument doesn’t sway Aaron Million, who contends Western water law is on his side.

“People think that California, Nevada, and Arizona can stop this project or that the governor in Wyoming can,” he said. “That’s just simply not true.”

Even with a host of critics calling the project speculative and unnecessary, Million is unfazed. He gives himself a 92 percent chance of coming out on top.

This story is part of a project covering the Colorado River, produced by KUNC and supported through a Walton Family Foundation grant. KUNC is solely responsible for its editorial content.