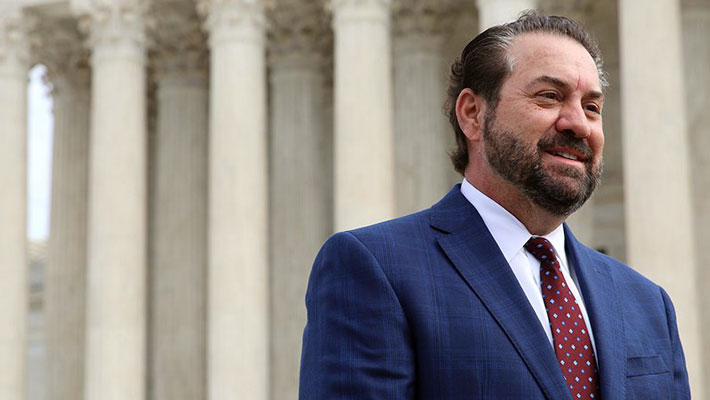 File Photo By Emily Sacia/Cronkite News: Arizona Attorney General Mark Brnovich leaves the Supreme Court in February after arguing that states should be allowed to defend the Trump-era public charge rule that the Biden administration dropped. The court Wednesday dismissed the case, but Brnovich said states are still looking for how to proceed.

WASHINGTON – The Supreme Court on Wednesday dismissed Arizona’s attempt to defend a Trump-era “public charge” that would have made it harder for immigrants to gain permanent residency after the Biden administration refused to defend the policy.

“It ensures that eligible immigrant families can continue to get the care and help every family needs,” she said in an email.

But Arizona Attorney General Mark Brnovich, who led the fight by 14 states to defend the rule after it was dropped by the Biden administration, said in a prepared statement that despite the ruling, the “coalition of states will evaluate how best to continue this important fight.”

“Allowing the Biden administration to recklessly abandon the defense of such rules will further the devastating consequences of this border crisis – now and for many years to come,” said Brnovich spokesperson Brittni Thomason in a statement.

The rule, which has been on the books for more than 100 years, allows the government to deny admission or permanent residency to immigrants who cannot prove that they will not rely on public assistance or are not “likely at any time to become a public charge.”

The Trump administration in 2019 interpreted the rules more broadly and expanded the programs and benefits that can be considered a “public charge” when determining immigration status.

That rule was immediately challenged by governments and advocates across the country, who went to court seeking – successfully in most cases – to block the law that they said would deny basic necessities to their residents. The Trump administration fought back.

But shortly after taking office in 2021, the Biden administration said it would no longer enforce the harsher interpretation of the public charge rule that it said, “was not consistent with our nation’s values.” It also stopped defending the rule in courts, then pointed to a U.S. District Court ruling from Illinois that vacated the regulation and said U.S. Citizenship and Immigration and Citizenship Services would no longer be able to enforce it.

That prompted Brnovich and attorneys general from other conservative states to file a motion seeking to take the place of the federal government and defend the rule in the 9th U.S. Circuit Court of Appeals. The circuit court refused, sparking the appeal to the Supreme Court.

The states argued in February that the federal government violated the Administrative Procedure Act by dropping the rule without first giving notice and holding public hearings on the issue.

But the Supreme Court did not rule on that argument, and instead dismissed the case Wednesday as having been “improvidently granted” – essentially that it made a mistake agreeing to hear the case in the first place.

In a concurring opinion, Chief Justice John Roberts said the court was right to dismiss the case, which he called a “mare’s nest” of issues that could make it difficult for the court to decide if the Biden administration violated the process for dropping the rule. But he said it is still an issue that needs to be looked at by the court.

Roberts said a new administration is entitled to decide what policies to defend, but that the Biden administration “took a further step” that let it “circumvent the usual and important requirement” of giving notice under the APA.

“As part of this tactic … the government successfully opposed efforts by other interested parties … to intervene in order to carry on the defense of the Rule, including possibly before this court,” he said in the concurrence that was joined by Justices Clarence Thomas, Samuel Alito and Neil Gorsuch. The dismissal “should not be taken as reflective of a view on any of the foregoing issue” or any current or future litigation, he wrote.

Brnovich had said that “commonsense immigration policy requires noncitizens to be responsible, self-sufficient, and contributing members of society in order to obtain green cards,” arguing before the Supreme Court in February that this country is the “land of the free and of industrious immigrants, but it is not a welfare state.”

He has said that implementing the Trump-era rule would save states over $1 billion in direct payments for programs such as food stamps, Medicaid, and Temporary Assistance to Needy Families.

Advocates say those programs are there for a reason.

“These programs are designed to serve children of low-income households,” said Jose Patiño, vice president of education at Aliento. “For me, anything that we create programs to support children, I would normally support.”

Patiño said some immigrant families stopped applying for benefits, even during the pandemic, because “they feared that that would be considered within the public charge rule” and that it would affect consideration of their immigration status.

“Because of misinformation a lot of folks still have not fully come back in terms of applying for the programs and benefits that they were entitled to,” he said.

The Biden administration proposed a new public charge rule in February that it said will not penalize individuals for “choosing to access the health benefits and the other supplemental government services available to them.”

The proposed rule would drop the Supplemental Nutrition Assistance Program, the Children’s Health Insurance Program, housing and transportation benefits, and pandemic assistance from those programs that would affect a public charge determination.