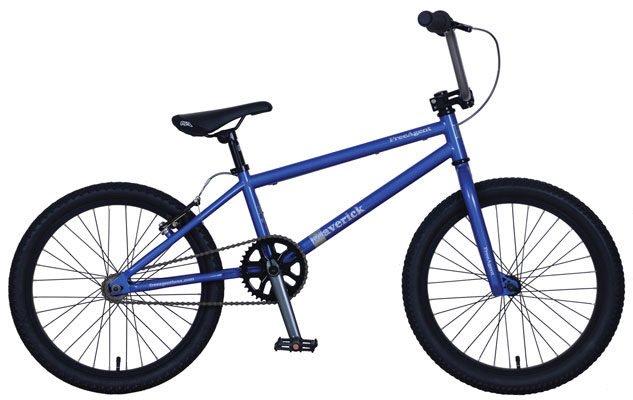 A stolen bicycle similar to this one was recovered after an officer received a tip from a local business.

SAFFORD – The mantra to shop local is often heard and while it helps out community and neighbors it also helps protect the consumer.

An example of this is the recovery of a Free Agent 20” BMX bicycle after it was stolen Monday, Jan. 21.

A woman called the police at about 5:52 p.m. that day and informed them that her son’s bicycle was stolen while he shopped at Richard’s Music Store on 5th Avenue. She said her son had placed his bike in the back alley of the store while he entered the business and when he came out the bike was gone.

She described it as being dark metallic blue with black rims and that it had cost $352.81 when it was purchased in December.

Two days later, a second officer responded to Cycle Path at 726 S. 6th Ave. after the owner had called with information regarding the stolen bike.

He said a woman had brought the bike in to have a tire repaired and when he performed the repair he wrote down the serial number to the bike. Upon researching the number, he found out the bike was actually sold to a former employee of his. The man described the woman and the bicycle, and the officer believed it to be Tonya Reed, who he had seen on a bicycle earlier in the day. The officer then called the victim to make sure Reed didn’t have permission to use the bike and learned that a theft report on it had previously been filed.

On Thursday, Jan. 24, a third officer located Reed and arrested her on a warrant out of the Gila Valley Consolidated Court for criminal trespassing in the third degree. The officer also had knowledge that Reed, who suffers from mental illness, was a suspect in the theft of the bicycle.

Upon questioning, Reed readily admitted taking the bike and said she did so because it was blue and blue is the color of her gang. Reed was then booked into the Graham County Adult Detention Facility on her warrant and was given a separate citation for theft.

After leaving the jail, the officer responded to Reed’s residence and the occupants showed the officer where the bicycle was laying in the front yard. The occupants said they had a feeling Reed had stolen the bike but were not sure, so they did not report it.

The officer secured the bike and took it back to the Safford Police Department, where he logged it in as recovered property be released back to the owner.