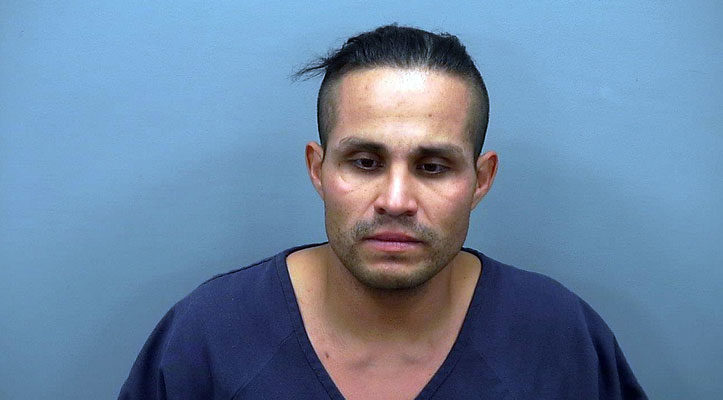 Contributed Photo/Courtesy GCSO: Juan Garcia, 33, was arrested and booked into the jail on an aggravated assault charge. It is the second time within a month that he was booked for assaulting an innocent victim without provocation.

SAFFORD – Juan Rodriguez Garcia, 33, was arrested and booked into the Graham County Adult Detention Facility on Thursday, Jan. 24, on charges of aggravated assault and disorderly conduct. Garcia allegedly knocked a man off a bicycle he was riding and then proceeded to beat the victim until a passerby chased him away.

The victim suffered lacerations above his left eye and to his head, as well as a hematoma on his forehead and a torn bicep muscle, according to a Safford Police report. The victim was transported to Mt. Graham Regional Medical Center by paramedics with Lifeline Ambulance for treatment. He advised that he was riding his bicycle on 9th Street when an unknown man came out from behind a parked semi-truck trailer just past 5th Avenue and knocked him down.

The passerby called Graham County Dispatch and followed the suspect. Shortly thereafter, another Safford officer captured the suspect and identified him as Garcia, who was recently arrested for another assault from Jan. 4 where he allegedly attacked an elderly maintenance man without provocation. In that case, Garcia was scheduled to have a pretrial conference Tuesday.

In both circumstances, Garcia said something just told him to assault the people and that he hears and sees things others don’t, which moves him to take action. The various reports did not list if Garcia has had a recent mental health evaluation.

Garcia previously spent a year in prison after having his probation revoked from an original charge of aggravated assault with a deadly weapon guilty plea from 2016.