Graham County lists 2,369 total for the pandemic, with 38 deaths

The new cases are coupled with increased hospitalizations, limiting current ICU beds to just 10 percent throughout the state.

The Graham County Department of Health and Human Services announced 29 new positive tests on Monday and 21 on Tuesday push the county’s total for the pandemic to 2,419. The new cases include 30 from Safford, 16 from Thatcher, and four from Pima.

After having its biggest increase of cases in one month in October (408), Graham County easily surpassed that mark with 968 new positive tests in November.

As of Tuesday, Graham County had 2,419 total confirmed cases, with 1,368 recovered, 1,013 actives, and 38 deaths. According to GCDHHS criteria, a positive test is not considered a recovered patient until they have 30 days symptom-free. Graham County has about 39,000 residents. A total of 6.2 percent of Graham County has tested positive for COVID-19, with the currently active number at 2.6 percent. 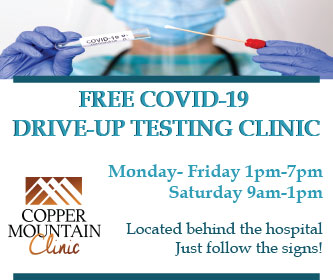 A total of 38 people, nearly all over the age of 65 and who had pre-existing health conditions, have died with COVID-19 in Graham County. About 1.6 percent of those who have tested positive for the virus in Graham County have died after contracting it. However, that number jumps to about 10 percent for elderly patients. There were 17 patients hospitalized for COVID-19 at the Mt. Graham Regional Medical Center as of Tuesday.

Last Wednesday, Gov. Doug Ducey instituted three new executive orders, one restricting gatherings to fewer than 50 people, one that makes it easier for restaurants to get permits for outdoor dining, and another that requires health insurers to pay for a patient’s COVID-19 vaccination. A vaccine should be in Arizona in the next few weeks, with healthcare workers and the elderly being serviced first.

The health department will hold a testing blitz on Friday, Dec. 11, from 7 a.m. – 1 p.m. at the Graham County Fairgrounds.

The Greenlee County Health Department listed eight new positive tests on Monday to raise its total for the pandemic to 305.

The health department has administered tests to 3,007 people as of Monday, with 2,702 being negative, and 305 positives, according to the department. The county has 185 active cases, 117 recovered cases, and three deaths. Greenlee County has about 10,000 residents.

The Greenlee County Board of Supervisors deadlocked with a 1-1 tie to extend its mask mandate, which will effectively end the mandate on Dec. 12 if nothing more occurs. Supervisor David Gomez was absent due to illness and Supervisor Richard Lunt (Duncan) voted against extending the mandate as he has every vote.

For the state, the Arizona Department of Health Services reported 12,314 new cases Tuesday to bring the total to 378,157 for the state. It reported 23 new deaths to increase the total fatalities due, at least in part, to COVID-19 to and amended 6,973 in Arizona. The state has about 7.3 million residents and nearly two million tests have been taken.

The county with the highest rate of cases per 100,000 people currently is Yuma, followed by Santa Cruz, Apache, and Navajo counties.