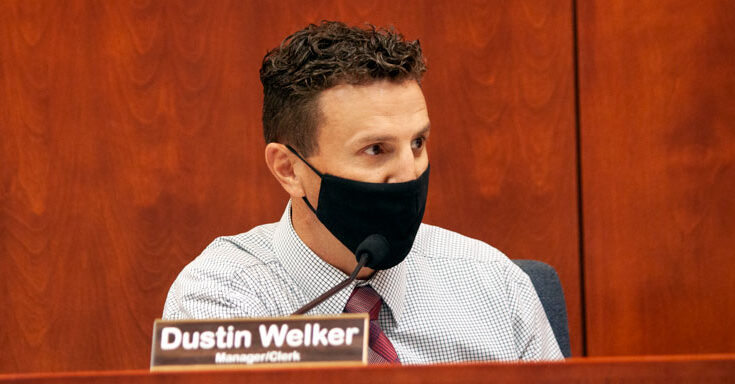 Jon Johnson Photo/Gila Herald: Graham County Manager Dustin Welker addresses the board and visitors during Wednesday’s special meeting. The BOS unanimously voted to enact a mask mandate for all of Graham County.

According to the regulation, all persons age 6 and over in Graham County who do not qualify for an exemption of the regulations must wear a “face covering” while inside the enclosed area of any place of public accommodation. Adults accompanying children ages 2-5 shall use reasonable efforts to cause those children to wear face coverings. The regulation is effective for all areas of Graham County, incorporated and unincorporated, and includes all municipalities. Arizona Governor Doug Ducey previously issued an executive order allowing county governments to pass such regulations in midst of the COVID-19 pandemic. The regulation was molded after similar ones passed in Maricopa and Greenlee counties, according to Graham County Manager Dustin Welker.

Graham County Board of Supervisors Chairman Paul David conducted the meeting and thanked Welker for his work on the subject.

Dustin Welker said the BOS’ goal was to be united as a county with the cities and towns and keep an action approved by all. He added that the new regulation is meant to help curb the rate of COVID-19 infection and allow the hospital to continue to operate without being overrun with patients. MGRMC CEO Roland Knox previously informed the BOS that the hospital was having trouble keeping up with the amount of COVID-19 patients and that 21 staff members had gone out sick as well.

Welker advised the mandate will be in effect for the next six weeks and will expire the day after the board’s first regularly scheduled meeting on Jan. 4, 2021, unless they choose to renew it at that time. In addition to the new regulation, the county has also instituted a media blitz encouraging the populace to wear a face-covering in public.

“I’m in favor of the mask regulation,” Supervisor Danny Smith said. “It’s not something that I thought that I would be doing a couple of weeks ago. No one wants to require anyone to do anything; no one wants to limit their personal liberty, or, in my case, I love the saying, ‘to err on the side of freedom’. And I believe that’s what we’re doing. I believe that’s where we’ve been. I believe that’s where we will stay. We’ve been doing that for a long, long time. But as I look at this regulation, it is more thoughtful ask than mandate; it is more carrot than stick; it’s more honey than vinegar, and although this is a snapshot at 8 o’clock on a Wednesday morning – what we are doing – what you will see for the next six weeks, couple months, is a robust campaign – targeted, personal Graham County campaign – that we have worked on and will work on every day.”

According to the regulation, all places of public accommodation shall require staff members to wear face coverings while working in areas open to the general public, and areas in which interactions with other staff members are likely.

Supervisor Jim Palmer said he never thought such a regulation would come around but that he has been inundated with calls from the medical community and others who are very concerned with what is going on with the rise of positive tests and those becoming ill in Graham County.

“While I hate this worse than anything in the world, I think we have to look at the consequences,” Palmer said. “We received a letter that was signed unanimously from the Chamber of Commerce’s board. Their concern is that if things continue to escalate, we will see businesses shut down. Not from us, from the state. And we have seen the catastrophic effect that has had on our community and on our state and in our nation. We simply cannot afford to go there again. We’ve got to keep our businesses open and operating. And if doing this makes only an incremental difference, and allows that to happen, then it’s the responsible thing to do.”

Exemptions include children under 2 years old, restaurant patrons while they are dining, people who are exercising in communal outdoor spaces, or those walking or exercising with other people from the same household. Face coverings are required for those meeting in outdoor spaces where physical distancing is not maintained.

Other exemptions include settings where it is not feasible to wear a face covering, such as at a dental appointment, people in personal vehicles, first responders, or people complying with directions from first responders.

People who decline to wear a face-covering due to a medical condition shall not be required to produce documentation verifying the condition.

The board stressed this action will be educational, and those violating it will have a warning as a first offense and then be subject to a fine of not more than $50 for any further offense.

After the vote, Dr. Philip Tutor spoke against the mask regulation during the “Call to the Public” portion of the meeting. Dr. Tutor is a pastor at the New Life City Church.

“There are people in this state that have lost their job because they cannot wear a mask because of a physical condition but they’re told that you can’t keep your job,” Tutor said. “The only thing that I’ve observed – and it’s benefitting our Valley economically – is the non-denominationals, the Baptists, and the Mormons can now go into liquor stores and not be recognized.”

“I’ve got a condition that I can’t wear a mask and I get mad as hell when I can’t go into certain places. Or, I go into a restaurant and have to wear a mask in and then sit down from people six feet away. Are those germs – or whatever it is – do they somehow stop at six feet? No. It’s absurd. And I think that by mandating that masks are worn is going to absolutely – and as small a town as we have – it’s going to destroy our economy. And I’m 100 percent opposed to it . . . In my opinion, it is absolutely wrong that we are mandated we have to wear masks. It’s ridiculous.”

After his comments, David told Tutor that “we respect your opinion and support your right to express it.”