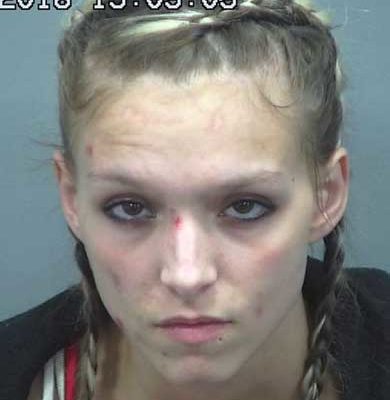 Contributed Photo/Courtesy GCSO: Shirley Lollis was booked into jail on a warrant after being found squatting at a home undergoing renovation for sale.

Couple flees from cops but were soon apprehended

SAFFORD – A homeless couple was arrested Wednesday, April 4, after being chased out of a residence that was undergoing renovation.

Shirley Lollis, 21, was booked into the Graham County Adult Detention Facility on a warrant regarding a petition to revoke her probation, which stemmed from a charge of attempted possession of a narcotic drug. Lollis and Eddie Guerro, 25, face additional charges of criminal trespass in the first degree and possession of drug paraphernalia.

Officers were dispatched to a residence on W. Main Street at about 12:35 p.m. regarding a possible burglary in progress. Upon arrival, officers located Guerro on a bicycle on the sidewalk in front of the residence with a trash bag full of items. Lollis was also seen walking next to Guerro.

When the officer approached, Lollis walked toward another house and attempted to get in the side door. Officers later learned the second house is occupied by a relative of Guerro’s.

The officer told Guerro to stay put and began to pursue Lollis. As soon as the officer left, Guerro took off on his bicycle but was soon apprehended by other officers, who also found a glass pipe with apparent drug residue and a burnt spoon with residue on Guerro.

After not being let inside the house, Lollis reportedly hid behind the residence’s garage. After being cornered by the officer, Lollis jumped over a fence into the backyard of another residence and continued to flee. She was later found hiding in a storage building and was taken into custody.

During interrogation, Guerro allegedly said the pair were homeless and used to have an acquaintance who lived at the house where they were squatting. He said the door to the residence was unlocked, so they made themselves at home and smoked methamphetamine for the two days they were there. A local company is renovating the house for resale, and the representative said that the home also had a thick stench of cigarette smoke, which would be difficult to remove and could hurt its resale value. The representative also said the home was secured and that someone had “popped” the lock on the sliding glass door.

Lollis gave the same account as Guerro and said the door was unlocked and that they had only been there for two days. She eventually also admitted smoking meth at the residence with Guerro, according to her statements to police.

Lollis was then booked into the jail on her warrant and Guerro was released. The officer informed both subjects that additional charges would be pending a review fo the Graham County Attorney’s Office.