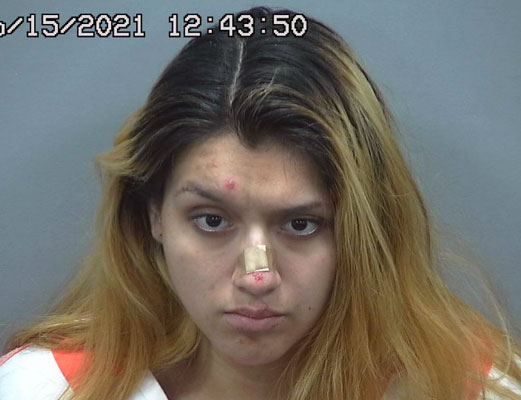 Contributed Photo/Courtesy GCSO: Hailee Guerrero, 21, was booked into jail on meth and fentanyl charges, as well as possession of drug paraphernalia, after being pulled over for speeding past an officer.

SAFFORD – A traffic stop for speeding led to the arrest of a woman on various drug charges, including possession of meth and fentanyl.

According to a Safford Police report, an officer was on patrol in the 1300 block of 1st Avenue at about 9:53 a.m. when he noticed a maroon Chevy Impala pass him up going 45 mph in a 35-mph-zone.

After initiated a traffic stop, the officer observed tin foil with black residue common with heroin use.

The driver, identified as Hailee Shyann Guerrero, 21, reportedly did not have her driver’s license and initially refused the officer’s request to search the vehicle.

However, the officer advised he saw drug paraphernalia in plain sight, so he handcuffed Guerrero and searched the car.

The search yielded various pieces of drug paraphernalia, as well as three blue fentanyl pills – which have been proliferating Safford’s streets as of late and have been the cause for multiple drug overdoses – and a baggie with crystal methamphetamine.

She was allowed to call her grandmother, who arrived at the scene and took possession of the Chevy so it wouldn’t have to be towed.