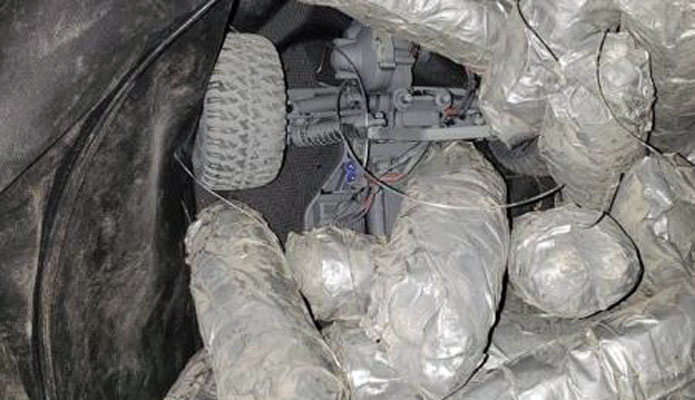 Contributed Photo/Courtesy U.S. Customs and Border Protection: Agents arrested a teen in possession of bundles of meth and a remote-controlled car.

SAN DIEGO – U.S. Border Patrol agents arrested a 16-year-old boy on Sunday who was using a remote-controlled car to transport methamphetamine across the border.

On Nov. 17, at about 12:30 a.m., Border Patrol agents observed a person with two duffel bags walking along the secondary border wall ducking in-and-out of the agent’s view.  The agent notified other agents in the area, who responded to the site.

One of the agents spotted the suspect hiding in thick brush near the U.S./Mexico International Border.  The young man had a remote-controlled car and two large duffel bags in his possession.  The agent approached him and discovered he was a 16-year-old U.S citizen.

Questioning the young man and searching his bags, the agent discovered 50 packages of methamphetamine.  The youth was arrested and taken to a nearby station to face drug smuggling charges.  The methamphetamine bundles weighed 55.84 pounds and have an estimated street value of $106,096.

Agents foiled a similar event in 2017 that used a remote-controlled drone to smuggle narcotics across the border.  Commenting upon Sunday’s seizure, San Diego Sector Chief Patrol Agent Douglas Harrison stated, “I am extremely proud of the agents’ heightened vigilance and hard work in stopping this unusual smuggling scheme.”

See the following links for the 2017 drone-smuggling press release and the subject’s conviction announcement.