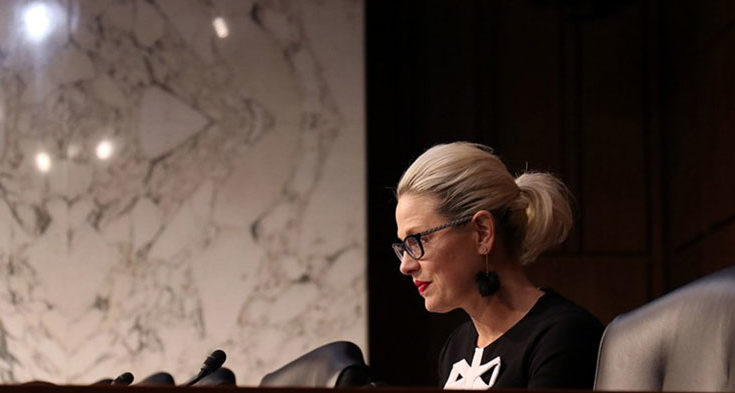 Photo By Keerthi Vedantam/Cronkite News: Arizona Sen. Kyrsten Sinema was one of seven Democrats who voted against including a $15-an-hour minimum wage in a pandemic relief bill Friday. While progressives attacked her vote on social media, political analysts say it’s not clear what the long-term effect will be for Sinema, who is not up for re-election until 2024.

WASHINGTON D.C. – Arizona Sen. Kyrsten Sinema said she still believes the Senate should take up a higher minimum wage, but that didn’t keep critics from lighting into her after her Friday vote to keep the higher wage out of the latest pandemic relief package.

Sinema was one of seven Democrats who joined Republicans to reject an amendment to the American Rescue Plan that would have raised the wage to $15 an hour over five years. That move was backed by the House and the White House but rejected in the Senate on procedural grounds.

A video of Sinema appearing to curtsy before giving a thumbs-down to the minimum wage amendment brought an angry outburst on social media. With hashtags like #letthemeatcake, opponents recycled a 2014 Sinema tweet where she called a higher minimum wage a “no-brainer,” and they issued calls for her to be “primaried” by the liberal wing of the Democratic Party.

But analysts are split on how much damage the vote, and the ensuing hubbub, will have on Sinema’s long-term political future.

Garrett Archer, a data analyst at ABC15, said that Sinema may have to face a “credible challenger” in the 2024 primaries, something unusual for the typically outnumbered Democratic Party in Arizona.

“That’s one of those weird things in this emerging Democratic Party in Arizona, it’s gotten much larger, it’s gotten even more diverse than it was when Kyrsten was first elected,” Archer said. “So, with this party, does it make it harder for Kyrsten to survive a primary challenge? We don’t know the answer yet.”

But Mike Noble, chief of research and a managing partner of OH Predictive Insights, said “the biggest thing” for Sinema is that she has the advantage of not having to face re-election until 2024.

“She has plenty of time from now until then to figure out how to make it right with them,” Noble said of the progressive wing of the party.

Sinema’s office did not respond to a request for comment Monday on the furor. But on Friday, the office released a statement in which she cited her history of working for a higher minimum wage in Arizona and the need for the Senate to revisit the issue.

“No person who works full time should live in poverty,” her statement said. “Senators in both parties have shown support for raising the federal minimum wage and the Senate should hold an open debate and amendment process on raising the minimum wage, separate from the COVID-focused reconciliation bill.”

That $1.9 trillion bill is one of the first major initiatives of the Biden administration and includes funds for everything from individual stimulus checks and increased unemployment benefits, to support for vaccinations, businesses, local governments, and schools.

The $15 minimum wage was included in the version the House approved Wednesday but stripped from the Senate bill after the Senate parliamentarian ruled the minimum wage could not be included as part of the budget bill. The current federal minimum wage is $7.25 an hour. In Arizona, the rate is $12.15 an hour this year.

Sen. Bernie Sanders, I-Vt., tried to add the minimum wage language back into the bill, but his amendment was rejected on 42-58 vote that included Sinema voting “no.”

Sinema joined all Democrats on Saturday, including fellow Arizona Sen. Mark Kelly, to approve the final version of the American Rescue Plan 50-49, on a straight party-line vote.

Jason Rose, an Arizona political consultant, said Sinema’s vote against the minimum-wage amendment “showed the qualities and leadership of” former Arizona Sen. John McCain, a Republican who often crossed his own party. Rose said Sinema should be applauded for voting independently no matter the political consequences.

“When extremes in either party want you to obliterate rules or ignore tradition, it’s nice to have someone with spine to remind them that’s what leadership is all about, and she’s here to represent Arizona, not the Democratic party,” Rose said Monday.

But Archer said that shifting demographics have contributed to Arizona’s political shifts in recent years, culminating in notable Democratic wins in 2020. Joe Biden became the first Democratic presidential nominee to win the state since 1996 and, with Kelly’s 2020 election, Arizona has two Democratic senators for the first time in decades.

Those shifts will likely continue, he said, which could be troublesome for Sinema by 2024.

“We have people from both California and the Midwest coming in, that typically are settling in a suburban atmosphere,” Archer said. “So, as long as those types of people continue to be left-leaning, then the chances are that things get a little worse (for Sinema).”

But Rose said the minimum wage can be addressed separately and could well win on its own in the Senate. If “people want to try to hold her hostage because of that? Good on her to say, ‘Bring it on,’” he said.