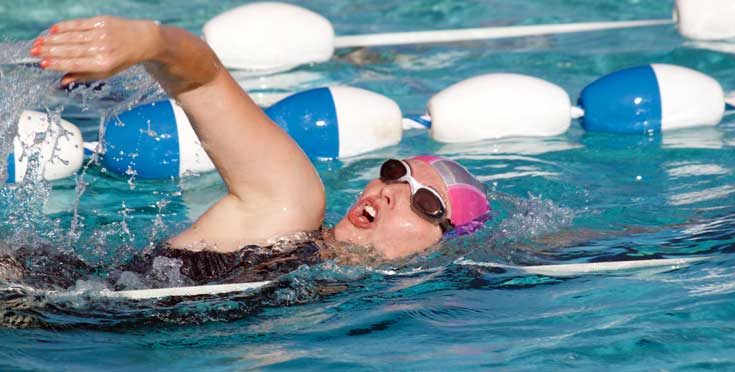 Jon Johnson File Photo/Gila Herald: Rebecca Johnson slices gracefully through the water during the swim portion of the Tri Community Tri. The event will be held Saturday, Sept. 17 in Pima.

PIMA – Whether you are 7 or 70, in shape or not, the 13th annual Tri Community Tri has a race for you, but hurry and sign up today as the event will be held Saturday, Sept. 17, and prices increase starting Sept. 1. Click here for more information or to sign up for the event.

The event is a sprint distance triathlon held in Pima, Arizona. After braving the chilly Pima Pool for a 425-yard swim, racers exit and hop on their bikes stationed right outside the pool gates for a 15-mile ride. The bicycle route takes competitors through town to the outskirts with rolling hills and beautiful views of majestic Mount Graham. The racers then dismount at the same bike staging location and complete the event with a 5K run through town, finishing under the big inflatable finish line with the crowd cheering. Medals are awarded to the top-three finishers in each age bracket for male and female participants.

“It’s a great starting event,” Brian Paull previously told the Gila Herald. “There’s a route for new beginners to the sport and (the Sprint) is long enough for those who are seasoned to get a good challenge . . . The overall winner (in 2019 Bobby Gonzales) actually is using this specifically for a warm-up to do a longer race,” he said.

If the sprint distance is still out of one’s reach, there is a Super Sprint distance that includes a 125-yard swim, followed by a 7-mile bicycle ride, and finished with a 1.5-mile run. Medals will be awarded for Super Sprint contestants who finish in the top three in each age bracket for males and females.

This year, the race is introducing a special children’s distance “kids triathlon”. This race will include a 75-yard swim, followed by a 1.2-mile bike ride and a half-mile run to the finish. Medals will be given to the overall top three male and female finishers under the age of 15.

Leading the pack from start to finish for the males at last year’s race was Bobby Gonzales, of El Paso, who was the first in the water and the first to finish with an overall time of 1:07:10. Gonzales was followed by Joel Dunst and Adrian Betti, who both finished at exactly 1:14:57. CEP Timing, out of Phoenix, provided the timing for the event as it has done in the past. Gonzales has won the event multiple times and has the course record that he set in 2019 at 1:00:19.

For the females, four-time champion Melinda Nelson made her triumphant return after missing the 2019 event due to scheduling issues and finished first in a time of 1:22:20. Following closely on Nelson’s heels was long-time race competitor Stephanie Summers at 1:26:07, with Michelle Peterson just scoring third place overall in a time of 1:28:15.

In last year’s version of the Super Sprint, Haydn Wilkins took home first for the males in 38:35, followed by Jackson Paull in 39:34 and Ryan Kelley in 42.59. For the females, Hinako Uchida took home top honors by finishing in 43:17, followed by Hinckley Nelson in 44:02 and Jalin Tilley in 44:07.

Who will bring home the bragging rights this year?