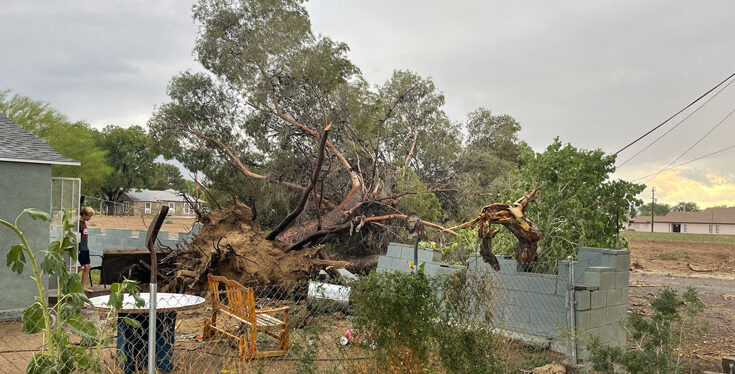 Jon Johnson Photo/Gila Herald: A large tree was blown down during the storm and knocked out a utility pole, causing a power disruption for the Central area.

One tree off Bigler Avenue took out a resident’s wall and the utility pole, knocking out power to the area and closing off the road. A nearby barn also blew down.

The downed power lines reportedly draped over a vehicle with occupants inside. The electricity was then turned off and the occupants and vehicle were removed safely. No injuries were reported.

Lightning from the storm also caused a residence that was in the final stages of being built to catch fire and burn to the ground.

As of 5:30 p.m., Graham County Electric Cooperative workers were on the scene with new utility poles, working to remove the debris from Bigler Avenue and restore power to the residences in the area.

See more photos of the aftermath of the severe thunderstorm here.