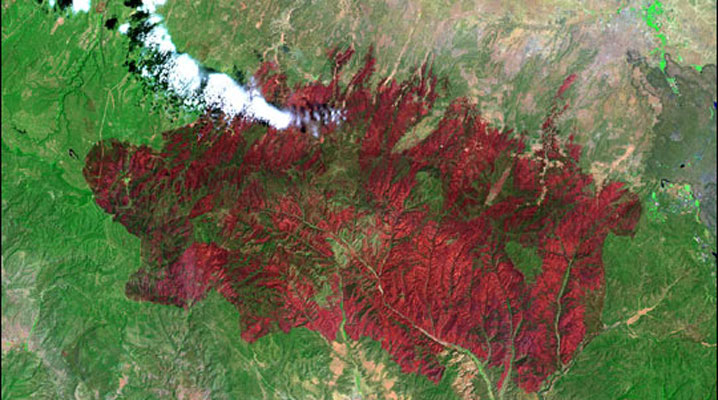 Image provided by the USGS EROS Data Center Satellite Systems Branch: This image from the Landsat Enhanced Thematic Mapper Plus (ETM+) shows the Rodeo-Chediski Fire on July 7, 2002. The result of two large fires that combined into a single blaze, the fire consumed almost half a million acres, and was the largest and most expensive fire in Arizona’s known history, costing more than $30 million before it was contained.

WASHINGTON D.C. – Arizona Senators Mark Kelly and Kyrsten Sinema applauded the passage of their bipartisan resolution commemorating the upcoming 20th anniversary of the Rodeo-Chediski Fire on June 18. Kelly and Sinema’s resolution honors the life-saving bravery and sacrifices of the first responders and firefighters who responded to the Rodeo-Chediski Fire and commends the courage of the Arizonans affected.

“Almost 20 years ago, our first responders, firefighters, and Arizonans showed great courage in the face of the Rodeo-Chediski Fire. Our resolution honors their bravery and reaffirms our commitment to Arizona’s first responders who put their lives on the line every day. We’ll continue working to ensure they have the support and resources needed to keep Arizonans safe,” said Senator Kelly.

“We’re recognizing the sacrifice and resilience of Arizona’s firefighters and the thousands of Arizonans forced to evacuate their homes due to the Rodeo-Chediski Fire. Wildfires continue to pose a serious threat in Arizona and today’s resolution is a recommitment of our work supporting firefighters and communities impacted by wildfires,” said Senator Sinema.

The Rodeo-Chediski Fire burned 468,638 acres, making it the second-largest recorded Arizona wildfire and Arizona’s first mega-fire. It forced the evacuation of more than 30,000 people in the city of Show Low, Pinetop-Lakeside, Navajo County, and the White Mountain Apache Tribe. 4,500 firefighters and support personnel, 30 helicopters, 251 engines, 92 water tankers, and 90 bulldozers were assigned to the Rodeo-Chediski Fire.