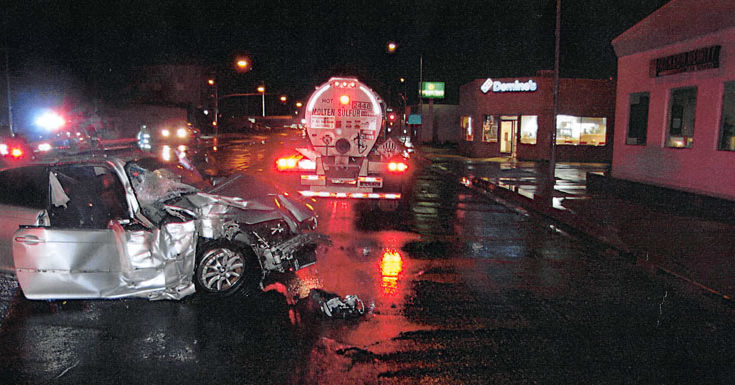 SAFFORD – For the second time in less than two weeks, a passenger vehicle collided with a semi-truck hauling a molten sulfur container.

The most recent collision occurred Sept. 1 at about 9:48 p.m. in the 400 block of U.S. Highway 70, just east of the Domino’s Pizza. The collision occurred during inclement weather that forced first responders to slow down to 25 mph while en route to the scene.

Upon arrival, an officer located a silver BMW partially underneath the semi truck’s trailer. The driver of the BMW, Hector Garcia, 24, was found with his head on the passenger side dashboard bleeding from his face. The passenger window was broken, and the officer checked Garcia’s pulse and saw that he was still breathing as the rain poured down on them.

Paramedics from Lifeline Ambulance removed Garcia from the car and transported him to Mt. Graham Regional Medical Center. A blood sample was obtained for impairment testing purposes. Garcia was then flown to Banner-University Medical Center Tucson, but as of Thursday he was no longer listed as a patient and his status is unknown.

From the evidence at the scene and a statement from the semi-truck driver, Aaron Schnebly, it appeared that the BMW was northbound on Central Avenue and attempted to cross the highway when it struck the rear tires of the westbound trailer, knocking it to the west and trapping it underneath.

Nuttall’s Towing removed the BMW from the scene and conducted repairs to the trailer to make the semi-truck operable.