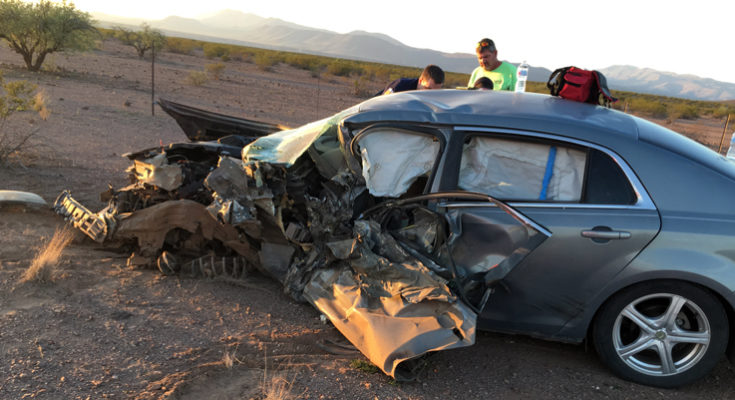 Contributed Photo/Courtesy DPS: Anthony Ray Montano is attended to by paramedics after his car was severely damaged in a crash on U.S. Highway 191. Authorities report Montano showed signs of drug impairment.

GRAHAM COUNTY – A man reportedly under the influence of drugs crossed into oncoming traffic during his commute home to Safford on U.S. Highway 191 North on Monday and collided with a semi truck hauling a molten sulphur container, which is used to make sulphuric acid.

The crash, which took place just less than two miles north of the intersection with U.S. Highway 70, was reportedly due to driver fatigue and driving while impaired.

According to a report from the Arizona Department of Public Safety, the alleged impaired driver, Anthony Ray Montano, 47, of Safford, will be charged with DUI, DUI-drug, possession of a dangerous drug, and possession of a narcotic drug.

Montano was badly injured in the crash and suffered, among other injuries, a compound fracture to his ankle/leg and a broken elbow with a laceration. He was initially transported by Lifeline Ambulance to Mt. Graham Regional Medical Center and then was airlifted to a Tucson hospital for further treatment.

Montano was southbound in a grey, 2009 Chevy Malibu at about 6:25 p.m. when he reportedly crossed over the center line and into the lane of a northbound semi-truck from Savage trucking, driven by Mark Leon McNeil, 63, of Safford. The semi-truck was hauling a molten sulphur container, but it was empty at the time of the crash.

McNeil advised that he moved over to the shoulder as much as he could to avoid a collision, but the Malibu hit the steps off his driver’s side door and then proceeded to slam into the semi-truck’s outer wheels.

Montano allegedly told a DPS officer that he fell asleep while driving and didn’t remember anything after that.

The collision severely damaged the front end of the Malibu, which ended up back over the southern lane and into the desert. McNeil was not injured in the collision and managed to guide the semi-truck onto the northbound lane’s shoulder.

As paramedics attended to Montano, a DPS officer noticed he showed signs of being impaired by drug use. A quantity of methamphetamine and concentrated cannabis called “dabs” or “wax” was located in Montano’s possession. The cannabis was packaged as being sold in a medical marijuana dispensary, but currently, the law that officers are adhering to classifies the concentrated marijuana with a very high tetrahydrocannabinol (THC) content as a narcotic drug.

Since both vehicles were off the roadway, the highway remained open during the investigation and recovery of the vehicles. Nutcracker Towing out of Pima removed Montano’s car, and Nuttall’s Towing out of Safford did the heavy lifting and removed the semi-truck and trailer from the scene.

The Graham County Sheriff’s Office and Arizona Department of Transportation assisted DPS at the crash site.