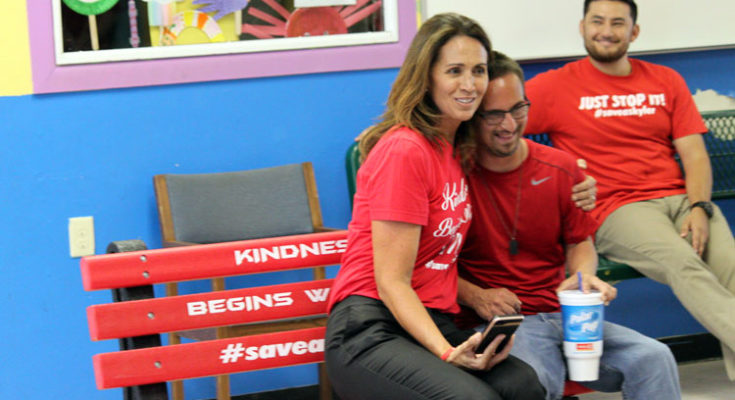 SAFFORD – On would have been her son Skyler’s 33rd birthday, Patti Wren stood in front of a group of children at the Boys & Girls Club of the Gila Valley – her infectious smile permeating through the crowd – and presented her signature Kindness Bench, which is a physical embodiment of her Save-A-Skyler initiative.

Skyler was relentlessly bullied at school by classmates and teachers. On April 15, 1999, at the tender age of 12, Skyler took his own life.

In 2016, Wren’s son, Mark, then 13, ran for student body president at Thatcher Middle School with one of his platforms being anti-bullying and the Save-A-Skyler program began with the title, “Just Stop It! #saveasklyer.

Since then, Wren has spread her message to schools throughout the Gila Valley and more and has begun a movement that includes thousands of people sharing the message.

Thursday was the third annual Red Out day for the Save-A-Skyler team, honoring Skyler’s birthday by spreading the group’s message. During her presentation to the Boys & Girls Club, Wren said the club would be receiving a gift for Skyler’s birthday and that she hoped the bench would serve the club well.

The donation was made possible by the Gila Valley Leadership Class XIII, which used leftover funds from its library improvement project to purchase the bench, which is well-built and made out of composite materials to weather the elements and stand the test of time.

Class member Alma Flores Valles said when her class started last year a lot of bullying and issues were getting a lot of attention and that influenced the class to focus on what it could do to help.

“We wanted our projects focused on the kids in the community,” she said.

Wren no longer uses the vernacular bullied and instead prefers children to specifically express what the issue is about. With that, the organization has shifted its focus to kindness, hence the new name of the benches.

“We’ve shifted our whole focus of Save-A-Skyler to be more of a kindness campaign,” Wren said. “The bench is called the kindness bench now, and we’re giving it to you because we really think it’s important that you have a daily reminder to be kind to others.”

She said the three times to sit on the bench is when a person needs a friend, when someone wants to be a friend to others or when a person wants to inform others of a good deed they had performed.

Boys & Girls Club Chief Executive Officer/Director Mick Ruiz was appreciative of the donation and said it really hit home for some of the members of the club who remember a club member from last year who took her own life at just 14 years old. While at the club, Patti hugged some members who were clearly affected by the thought and spoke with the older members privately after the presentation.

Ruiz said he was also appreciative of how the Save-A-Skyler’s focus had morphed into an overall positive tone.

“It’s good to have this here and to actually hear a message she’s actually changed their approach toward more kindness, more friendship rather than saying bullying – we like that. It’s nice to have it (the bench) out there. The kids will use it. It’s a nice addition to the club and it will follow us wherever we go.”

At the end of the presentation, Wren led the club members in singing Happy Birthday to Skylar. For now, the bench will be placed on the club’s playground area.