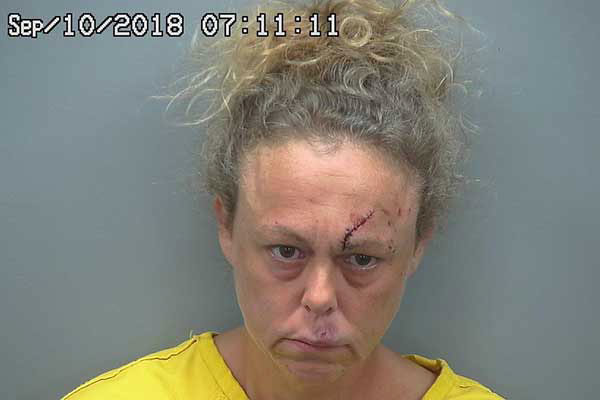 Contributed Photo/Courtesy GCSO: Dawn Whaley-Sheldon was booked into the jail for disorderly conduct after allegedly repeatedly harassing her neighbor’s children. Whaley, a seemingly emotionally disturbed individual, has had more than 45 contacts with police since July.

SAFFORD – A woman who has had at least 45 contacts with law enforcement since July was arrested and taken into custody Sunday, Sept. 9, after allegedly repeatedly harassing her neighbor’s children.

According to a Safford Police report, Whaley’s neighbor called authorities because Whaley kept coming over to her yard talking to her young children about drugs. The woman said her children were frightened by the encounters.

Whaley appears to be an emotionally disturbed person and has multiple contacts with police where she has claimed her neighbors are drug dealers and child molesters and once said a 2-year-old child was the anti-Christ.

On Sunday, an officer arrived at the residence on 4th Street at about 5:33 p.m. and spoke with Whaley, who appeared to be intoxicated. The officer informed Whaley to not have contact with the children and to not go back to her neighbor’s residence.

The officer then left but was called back within the hour after Whaley had reportedly returned and caused another disturbance, including threatening the children that she would “stuff Cheetos down their throats” so they wouldn’t be able to tell their parents secrets anymore.

Whaley was then taken into custody against her will and became belligerent to the officer, calling him a “dirty cop” and threatened to sue him. She was then escorted into the patrol vehicle and transported to the jail.